“In every school there are the cool and popular kids, and then there are the not-so-cool kids. Candidly, we go after the cool kids. We go after the attractive all-American kid with a great attitude and a lot of friends. A lot of people don’t belong, and they can’t belong. Are we exclusionary? Absolutely.” — Mike Jeffries, CEO of Abercrombie & Fitch

What teen feels “cool?” I’m fairly sure it’s the rare adult who looks back on their teen years, recalling confidence. I sure as heck wasn’t one of them.

I was 16 when a pair of hip modeling agents saw something in me I didn’t. From my first time before the camera, staring into what I lovingly coined the “beautiful black hole,” I seemed to morph into someone else—someone self-assured, pretty and Don’t mess with me-skilled. Afterward, I held my breath, awaiting dreaded feedback: You’re overweight, not pretty enough, too curvy in all the wrong places. When several meetings and shoots passed by with no mention of my size, I wondered for the first time if the notions I’d long held about my body were false. With the breath of one sentence, everything changed.

Following what had seemed a glorious shoot with a renowned Los Angeles photographer (I’ll call him “Gregor”), I laid on the ground, poised for that beloved black hole. Gregor lowered his camera, looked me in the eyes and said, “You could be working in Paris, if you lost ten or fifteen pounds.” The words felt like bricks to my stomach. Repulsion washed through me like sudden onset malaise. I wasn’t okay! My “fatness” was real.

My disgust rapidly transformed into motivation. Nothing would stop me, I decided. And nothing did, until countless shoots and weight loss tactics later, I lost consciousness while running toward the Seine in Paris, my heart and body too weak to carry on.

When I read of Jeffries’ remarks, his plot to keep the “uncool” (commercially unattractive) kids out of his stores, I couldn’t help but wonder if he’s become other individuals’ Gregor—confirming the belief that body shape, size and appearance determine whether one is embraceable or not, and that anyone larger than lithe is unsightly. I wish I could reach through the internet waves and hug every teen who feels unworthy, ensuring them that that is not the case: YOU’RE BEAUTIFUL, AND OKAY—MORE THAN OKAY—PRECISELY AS YOU ARE. ♥

One of my last modeling castings, post-recovery, was for Abercrombie & Fitch. Upon arrival, I learned that they were seeking “attractive” people to walk around their store—illustrating the consumer type they hoped to attract. I wish I could say that I was so disgusted that I rushed out and alerted the press, but I wasn’t. Presenting an “ideal” image for others to admire and aim for is what models do. I found the notion bothersome, but more so, boring. For both reasons, I turned the job offer down.

Last week, 18-year-old Benjamin O’ Keefe displayed the courage and wherewithal I lacked. In response to Jeffries’ remarks, the teen, who overcame an eating disorder and depression, started a petition, beckoning others to boycott the trendy store.

“Instead of inspiring young people to make healthy choices and better themselves, Mike Jeffries and his company has told them they will never be good enough. Well, he is wrong.” — Benjamin O’ Keefe

The National Eating Disorders Association learned of O’Keefe’s efforts, and has joined forces. I had the privilege of discussing the Abercrombie & Fitch ordeal with Lynn Grefe, NEDA’s president and CEO, last week. Here are the highlights of our conversation:

AM: Critics of the outcry against Abercrombie & Fitch claim that there’s nothing wrong with a company targeting a particular group in the name of prestige and profit. How is it different from, say, a plus-size store targeting larger consumers?

LG: I’ve never heard of a store that says, ‘We don’t want ugly or fat people coming in our store.’ And that is basically what he said. There is no problem with targeting consumers, such as plus-sized models, but to actually discriminate and say, ‘We don’t even want those people in our store, who don’t fit in our clothes, and aren’t pretty and attractive?’ It’s terrible.

AM: You’ve described Jeffries’ marketing ploys as bigotry. What do you mean?

LG: I have it right here! Bigotry is ‘the state of a mind of a bigot, someone who treats other people with hatred, contempt and intolerance.’ That’s intolerance, to say that we only want pretty people, small people. They are teaching kids how to discriminate, how to body shame, how to make other people feel bad—hopefully inadvertently, but they are doing it.

AM: I’m glad you brought up the age issue, because it’s such a vulnerable age already.

LG: It is a vulnerable age! Nobody wants to be body shamed. Right now weight bias is significant in this country… To do this with children, and they know that they are appealing to children, is just awful.

AM: What are the repercussions of weight bias?

LG: It absolutely leads to poor self esteem and poor body image, and can lead to eating disorders. When you are body shamed and told that you are no good, it causes many people to engage in unhealthy behaviors.

AM: Tell us about the campaign to boycott Abercrombie & Fitch.

LG: Benjamin O’ Keefe created a petition through Change.org. He was willing to speak out, and we’re on top of it with him. We really support and applaud him. Beyond the petition, we’re pushing out a campaign targeting parents, as much as anything. For an awful lot of these kids, it’s the parents’ credit card. Why would parents want to support this kind of discrimination? 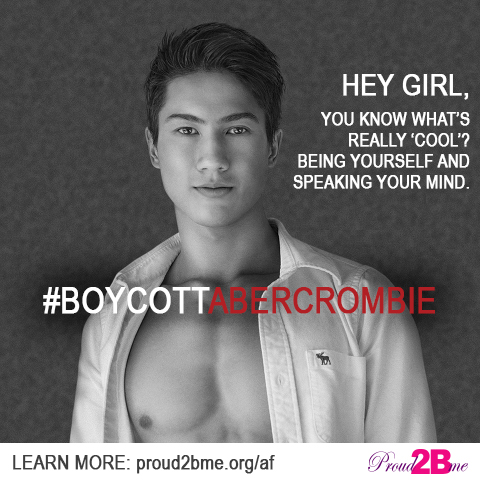 AM: A friend suggested to me that by speaking out against Jeffries, we’re supporting him—giving him free publicity.

LG: I think that people should be called out and shamed if they’re doing something that can hurt young people. People can buy what they want to buy, do what they want to do. I guess if this makes people want to shop there more, we didn’t do our job. But I don’t think we can ignore it. We don’t stand by and say it’s no big deal.

AM: What can we do to make a positive difference?

LG: I keep saying, ‘Be more concerned about the size of our hearts than the size of our hips.’ I really think if we could live that way, let people breathe and not feel like they’re under a microscope, it would make a huge difference.

To support O’ Keefe and NEDA’s efforts to make the world a happier, healthier place, sign the Boycott Abercrombie & Fitch petition. Show your support on Twitter by sharing this post, O’ Keefe’s post and/or the petition, using the hashtag #BoycottAbercrombie. For support regarding disordered eating thoughts or behaviors, call NEDA’s helpline: (800) 931-2237.

How do you feel about Mike Jeffries’ remarks? How about Benjamin O’ Keefe’s activism? Will they alter your shopping habits? I’d love to hear your thoughts!