It’s been said that thriller and horror authors are the nicest people on the planet because they get all of their angst out in their fiction. Doubtful? A conversation with renowned horror author Mike Sirota might convince you otherwise.

Not only does Sirota have twenty published novels (including the recently released Fire Dance) and fourteen years as an award-winning magazine feature writer and editor under his belt, he is a kick-butt writing coach, book editor and friend who cares as much about his writers’ success as he does his own. And he took time out of his busy schedule to answer questions on our behalf. (Thanks, Mike! :))

First, here is what others are saying about Sirota and his work:

“Mike Sirota is an absolute pro of a writer and, even for non-aficionados of ghost stories, these pages sing.” John Lescroart, New York Times bestselling author of Treasure Hunt and Damage

“Dear Mike: What can I say? Because of your expert guidance and fine touch I’m now a published author. When we first hooked up and started working together, I worried that the job of writing my novel would be an arduous task, filled with hours of agony and tedious rewrites, but I was wrong. Your lively comments and sense of humor have made the effort truly enjoyable. You keep editing and I’ll keep writing. It’s a pleasure working with you.” Jeff Sherratt, author of Detour to Murder

About Fire Dance:
“LEGENDARY AUTHOR MIKE SIROTA RETURNS! The searing wind whistles through the ruins of Concordia Sanitarium in Southern California’s bleak Anza-Borrego Desert. Now, something else stirs: the tormented spirits of the staff and inmates who perished in an all-consuming fire over a century earlier. As one gruesome murder after another plagues the nearby quiet retirement community of Smoke Tree, Tracy Russell and Mark Alderson try desperately to stop the one inmate that should never have been released—either in life or in death.” ZOVA Books

“Sirota returns…with this atmospheric tale of horror in the American Southwest. Horror fans will enjoy this updated take on the western ghost town.” Publishers Weekly

“So great to have a new book from legendary writing coach Mike Sirota. When he writes, you should listen!” Lisa Gardner, New York Times bestselling author of Live to Tell 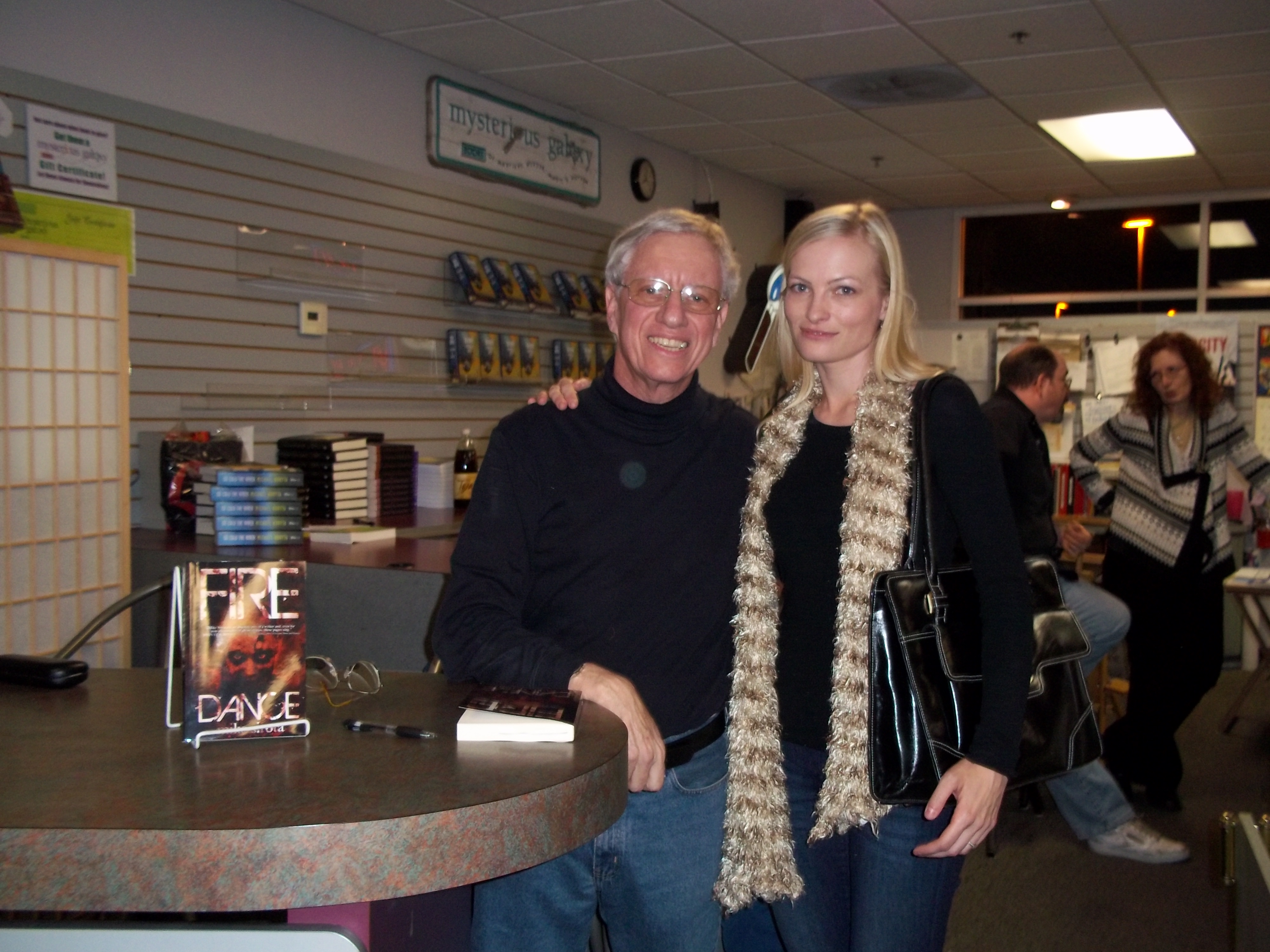 Here we are at his book signing at Mysterious Galaxy. Good times!

What inspired you to write Fire Dance?
MS: I go hiking in the Anza-Borrego desert, the setting for Fire Dance, at least once a year. On one trip, the old “what if” kicked in. What if, during the 1870s, they put a sanitarium in the desert where no one could run away, given the heat, the terrain, etc.? What if one inmate—Bruno—was a violent mass murderer? What if they all burned to death during a dance? And what if, over a century later, they all came back…

What aspect of Fire Dance are you most pleased with?
MS: While it is a ghost story—some even call it a horror novel—it has a strong romantic element. Tracy and Mark, the main protagonists, are two emotionally wounded people who come together in a small desert town—a retirement community, no less—under some remarkably challenging conditions. As they learn to love and trust again, their future is in doubt as they face the nightmare that is Bruno.

You have a gift for luring readers in from the get-go. How do you do it? Any tips for other writers?
MS: We call the opening of a novel the HOOK. Engage the reader on page one and don’t let go. Just recently I presented a hook workshop at a writers’ conference and I read the first page of Fire Dance to the attendees. It gratified me that they were so taken with the visualization of the desert, and the inmates wandering around the grounds in their white, ghostly shrouds. Scene builds on scene, each one designed to make the reader want to know more. Don’t bore the reader with expository narration, weather reports, the main character describing herself while looking in the mirror, the history of the world, part I, etc.

Of your many accomplishments, what makes you the most proud?
MS: All writers hope to be reviewed in Publishers Weekly, our major trade publication. Even a bad review can be a good thing. Of my first nineteen novels, not one was reviewed in PW. But Fire Dance was, and positively. It made my day.

What do you love most about writing?
MS: Just about everything. I love it when a scene comes out of my head so fast that I can’t input it quickly enough. I love doing research. The book/Internet research is cool enough, but for my final draft I do what I call “living research,” where I travel to the scene of my story to actually experience the setting. Last month I traveled to the Sierra Nevada foothills, the setting for my next novel, THE BURNING GROUND. Fantastic trip that, after I got home, enabled me to bring my pages to life. I do this for every story.

What common mistake(s) do you see new or up-and-coming writers make?
MS: Oh, how much time and space do you have! Weak opening hooks, inability to handle a POV (point of view), poor dialogue—I could go on and on. If you want to write a book you need to READ READ READ, which sounds basic, but you wouldn’t believe how many writers hardly read. Some writers even try to write in a genre of which they have never read a single book—because the genre is selling, they think.

Take writing classes. Go to writers’ conferences. Join a read-critique group. Read books about all aspects of writing. Subscribe to THE WRITER and WRITER’S DIGEST. Learn your craft!

Anything you wish you’d done differently throughout your career?
MS: I always tell writers to keep their day jobs. Had I followed that advice for myself years ago, I might have kept writing and improving my craft, instead of taking a hiatus of about seventeen years.

If you could give one bit of advice to writers, what would you suggest? Write for the love of writing. If you write to become a bestselling author and make a gazillion dollars, you will likely fail.

What’s next in the pipeline? I mentioned THE BURNING GROUND. It’s another ghost story, and also a romance, this time with three emotionally wounded people: a man, a woman, and a ten-year-old boy. It also became a statement book, as it involves a small Sierra foothill Native American tribe, the Maidu (they’re for real), and one particular village where everyone is exterminated by miners during the Gold Rush (true). Their spirits remain trapped here, and in the contemporary story their graves are desecrated by “thieves of time” (also a real problem) for artifacts. Now the spirits are really pissed, and guess what…

CONTEST!!! Order Fire Dance or Demon Shadows (Kindle edition). Send a copy of your purchase confirmation to august@augustmclaughlin.com and I’ll place your name in a drawing for a $20 iTunes gift card. And as always, I welcome your thoughts!