Happy weekend, all! As a followup to my last post, I’ve gathered recent posts composed by literary agents for writers. I hope you find them as insightful as I did.

Have the BEST book idea? Mike Larsen, of Larsen-Pomada Literary Agents, shares 16 Questions for Test-Marketing Your Book Idea on his award-winning blog.

Think your book is publish-ready? In her post, I Don’t Believe You, Janet Reid, of Fine Print Literary Management, suggests you think again.

Can publishers predetermine which books will sail to the top of the charts? No, according Jane Dystel of Dystel & Goderich Literary Management. Gain her insight here: A “Sure Thing?”

Frustrated by having to write AND build your platform? Read Publishing in a Brave New World: Rachel Gardner, of WordServe Literary Group, on the value of publishers and why authors should stop complaining about platform-building.

Thinking of wallpapering your home with rejection letters? Carly Watters, associate agent at the P.S. Literary Agency, tells us How to Avoid the Rejection Blues.

Thinking of attending a writer’s conference? Learn How to “Pick-Up” a Literary Agent and other conference tips from former literary agent and founder and CEO of Literary Agent Undercover, Mark Malesta. 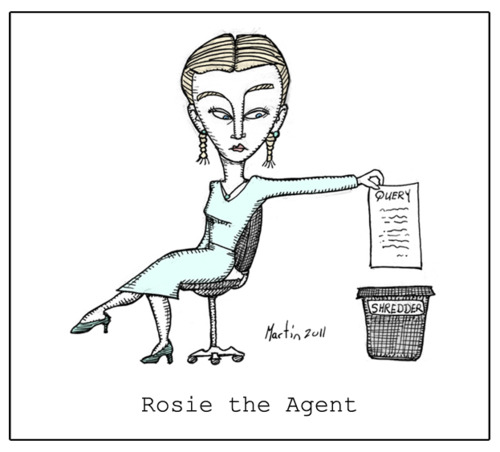 Pssst! Contrary to popular belief, literary agents are not only humans, but often congenial, helpful and sharp as whips. (Few pout as much as Rosie.) The first agent to read my manuscript sent me such a kind “rejection” letter, I considered adding his family to my holiday gift list. My perhaps worst response came from a woman who said she found my novel “quite disturbing” and that I best convert the whole thing into a family drama. Seeing as I write suspense thrillers, I wasn’t offended. I did, however, question my agents-to-approach picking skills…

Have an agent-related story to share? Lessons you’ve learned or are grappling with?