Home • Authors • Daniel Palmer on Writing, Success & the Dog that Saved his Career

Had my number-dyslexia not kicked in on the last day of Bouchercon this year, I might not have read what’s become one of my favorite thrillers of the year, written by one of my new fave authors. (I still swear my flight itinerary said 5pm, not noon. Ironic, or maybe not; Daniel Palmer’s book, DELIRIOUS, is chockfull of such mind trips. Hmm…)

Because of my “bonus” time at the conference, I had the opportunity to meet Daniel, thank him for his contributions to a panel I’d attended and learn more about his work. When I told him I write psychological thrillers, he said I might like his. Forget ‘might,’ I loved it. The characters, including those with psychiatric disorders, are relatable, the plot wicked smart and the opening and ending gratifying and unique. Books as enjoyable as DELIRIOUS are what led me to pursue a career in writing and keep me enthused about the thriller genre. 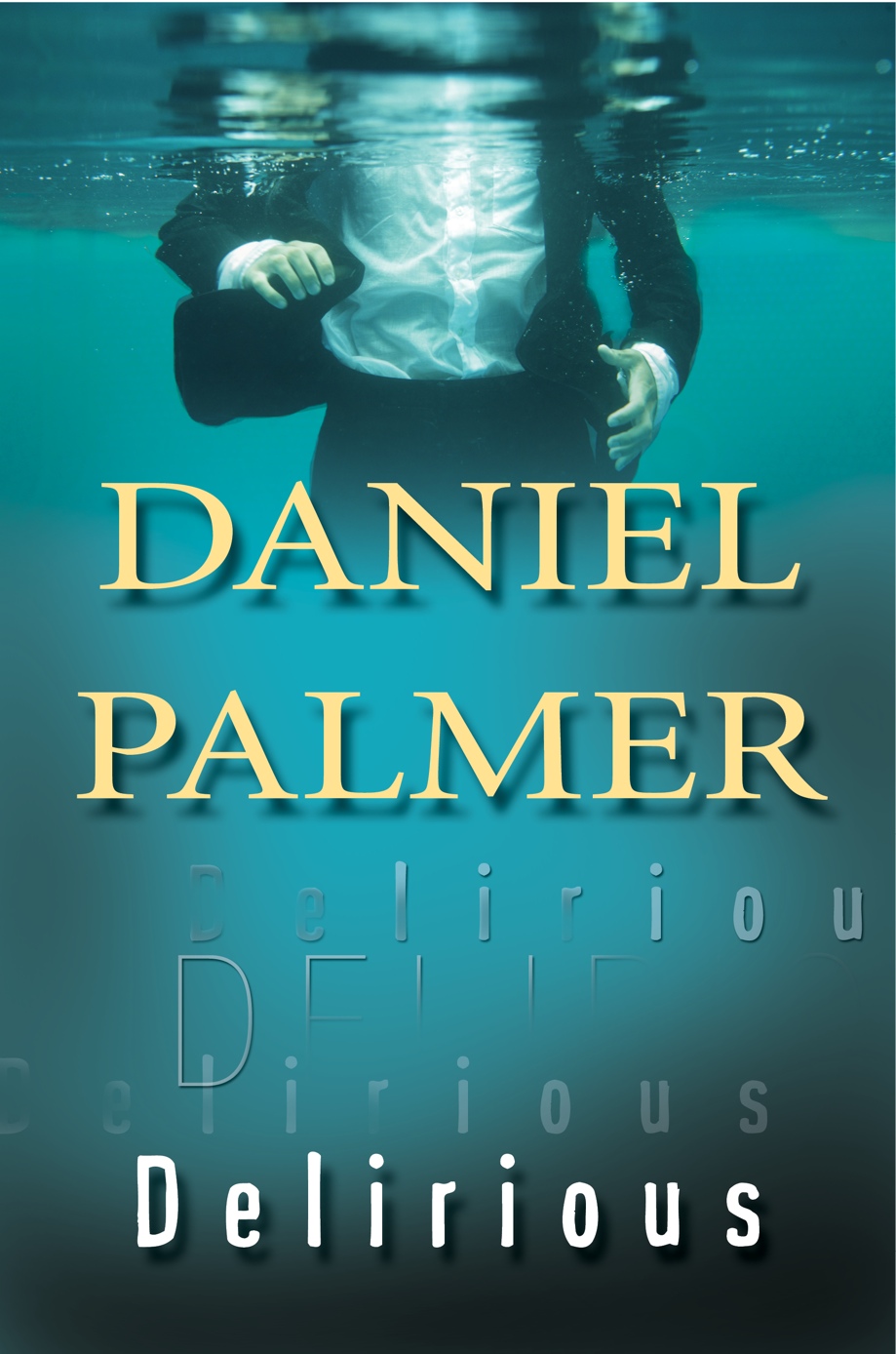 One day, Charlie Giles is an up-and-coming electronics superstar. The next, he’s a prime homicide suspect as his former employers are picked off one by one. Charlie watches his life unravel as his company and inventions are wrenched from his control, and his family is decimated. With nowhere else to turn, he enlists his schizophrenic brother to uncover the dark family secrets that lie at the heart of the unfolding terror. “Delirious” is a mind-bending story where the line between what is real and what is imagined twists and turns…an addictive literary puzzle that every reader will want to solve.
(Kensington, 2011)

What others are saying about DELIRIOUS:

“Delirious is one awesome kick-off for an exciting and multi-dimensional talent. It’s an electrifying ride, whetting the reader’s appetite for more. Daniel Palmer is a writer to watch. This guy is going to be around a long time.” —Steve Berry, New York Times bestselling author 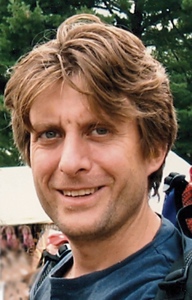 AM: I loved DELIRIOUS. What inspired you to write it?

DP: Thanks so much, August. I’m so glad you enjoyed the story. DELIRIOUS wasn’t my first attempt at novel writing. I started out writing romantic comedies from the guy’s point of view, only to discover that women, who tend to buy the majority of romance books, don’t particularly care about the guy’s point of view. I decided to take a swing at writing suspense novels, which happens to be the genre I love the most. I set off in search of a compelling ‘what if’ question that could be the basis of a thriller. I looked to my background in e-commerce and Web start up companies for inspiration. I thought, what if a super successful software/electronics entrepreneur, suddenly and inexplicably starts to go insane? I guess you could say the novel evolved from there.

AM: You threw some mighty intriguing twists into the story. Were these planned? Did you know the ending before you began?

DP: I wanted DELIRIOUS to feel like a trip down the rabbit hole. To pull the reader into the story I knew I had to emphasize how it might feel to go crazy. I made up a lot of the scenes showing Charlie’s decent into madness as I went along. However, I wrote with a framework for the story already in place. I knew how it would open. I figured by the middle of the book he’d be forcibly committed in a mental hospital. I had a rough idea of how it was going to end. Basically, I had markers I wanted to hit, but I didn’t have a detailed outline of how I was going to hit them.

AM: I felt you handled mental illness in a respectful, realistic way. Was this your aim? Can you tell us a bit about your research?

DP: I’m so glad you felt that way. Next to delivering non-stop suspense, it was my top priority for the book. It was important to me that I portrayed Joe’s schizophrenia as accurately as possible. I set out to write a story that avoided stereotypes of the disease without being didactic or sounding preachy.

My cousin is a Harvard trained neuropsychologist. In addition to her being my inspiration for Rachel’s character, my cousin educated me about the disease and various cognitive therapies. I read a ton on the subject as well, but she validated and vetted everything I wrote. In addition, I leaned heavily on an uncle who is a neurologist and a psychiatrist cousin. Bottom line, it helps to have really, really smart people in your family, or a network of friends who are generous with their time and expertise.

AM: I think I have a crush on Monte, the beagle. Was he based on a pet? Can I have him?

DP: I seriously owe my writing career to Monte. Acquiring editors at various publishing houses loved the book, but thought Charlie was too rough around the edges. He wasn’t a very kind person at the start of the story. I conveyed my publishing woes to a good friend of mine over burgers and beers and he suggested I give my protagonist a dog. It took me about two seconds to see the genius of his idea. I contacted my agent who took about one second to see it. “Yeah, a dog,” she said. “Give him a dog.”

From there, I reached out to a cousin (see a theme here?) who happens to be a veterinarian. We spent an hour talking about dog breeds, searching for the best breed for Charlie. We settled on a beagle. From there I gave Monte his quirks, chewing shoes and his devote love for the neighbor’s poodle, Maxine. A few weeks later I signed a three book contract with Kensington. Oline Cogdill wrote a blog post for Mystery Scene all about Monte. Soon after, I got a letter from a delighted reader informing me that she named their new family dog Monte. Apparently, a lot of folks were taken with my beagle.

AM: *Pauses to gush for Monte* You’re also an uber-talented musician. How does your experience as a songwriter influence your book writing?

DP: That’s very kind of you to say. I think of songwriting as just another form of storytelling. Often times, the magic beans that go into making a song work can be found in a compelling novel as well. A suspenseful story requires the right mix of conflict, character and stakes in order to take flight. I try to write songs that contain some (hopefully all) of those elements, albeit in a very condensed format. Songwriting has also been great for developing my sense of word play. The craft challenges me to write emotionally, without being obvious or clichéd. I try to bring that sensibility to my longer prose as well. I love writing novels and songs with equal passion. My only wish is that I could write a novel in one sitting the way I can sometimes pull together a completed song.

AM: I’m excited to read your second book, HELPLESS, come January. Was it easier, harder or otherwise different to write?

DP: The simple answer to your question is yes. Parts of it were easier because I had a better grasp on the craft of storytelling. There is something to be said for experience. At the same time, it was a very challenging book to write. I wanted to show the reader the hidden dangers of our tech-centric world without losing them in the jargon and concepts. I also wanted to show the inherent dangers of sexting without sacrificing the scope of my story.

HELPLESS is part family drama and part action thriller. A friend described it as Tom Clancy invades the O.C. I think that’s a pretty fitting description but those incongruous elements made for some interesting writing challenges. Library Journal gave HELPLESS a starred review so hopefully others feel that my efforts have paid off. The research for HELPLESS was similar to DELIRIOUS in that I had experts at the FBI and Navy SEALs who helped me bring the story to life in a realistic fashion.

AM: What are you most proud of in your writing career thus far?

DP: Pride is an interesting thing because it’s not woven into the DNA fabric of most writers I know. In this business, we’re as good as our last book. From what I’ve seen, the fear of losing our touch doesn’t really go away, regardless of having a publishing track record. I think a healthy dose of the skepticism is good for fueling the drive to write and create to the very best of our abilities. So if I had to pick my proudest moment, I’d say it was the first time I heard from a truly satisfied reader. That said, I haven’t made any best seller lists yet, so I reserve the right to change my answer.

AM: Ha… So granted! What do you find most challenging about novel writing?

DP: Solidifying the idea is for me the hardest part. It’s easy to come up with ideas, but to mold something into a workable structure, one that could carry the reader for four hundred plus pages, takes time, patience and the discipline to stare at your computer screen, or pad of paper, without jotting anything down.

AM: Any major goals or aspirations you hope to reach—writing or otherwise?

DP: I just hope to stay in this game.  I have a tremendous passion for creating. It’s a true blessing that I can do something I love and call it working.

AM: Many unpublished writers consider themselves “aspiring authors.” What’s your take on this? Any suggestions for newbie/ wanna-be/gonna-be authors?

DP: Writers write. I was never an aspiring songwriter. I was just a songwriter. If you want to write, then do it. Don’t think about it (unless you’re thinking about your idea).  To be good at this craft you’ve got to read a lot and write a lot. It takes time and perseverance. Unlike reality TV, there are no short cuts to success. There’s a reason nobody has made a reality show about becoming a novelist. Well, perhaps the reason is it would be a really dull reality show.

AM: Except for maybe the contestants… Thanks so much for sharing your time and insight, Daniel. Wishing you all possible success.
To learn more, including where to purchase DELIRIOUS, visit DanielPalmerBooks.com.
*****
CONTEST: Purchase DELIRIOUS today and email me a copy of your receipt for a chance to win a $20 Amazon.com gift card.
What about you? Any insight you’d like to share with Mr. Daniels? Do you consider yourself an “aspiring” author? Has adding/changing a character taken your book from good to great?