Home • Girl Boner • Do You Believe in Soul Mates? It’s Riskier Than You May Think.

“To say that one waits a lifetime for his soulmate to come around is a paradox. People eventually get sick of waiting, take a chance on someone, and by the art of commitment become soul mates, which takes a lifetime to perfect.” — Criss Jami, Venus in Arms

As a kid I visited a cemetery that held the remains of my great grandparents. I was only about five or six years old, but had already come to understand romantic notions of soul mates and “the one.” My parents had found “the one” in each other, after all, and seemed to know it instantly. Then there were all the episodes of General Hospital I wasn’t supposed to be watching during “nap” time. That show was riddled with soul mates!

As I wandered around perusing graves, I landed at a fairly new one for a boy with my same birthdate. As only a melodramatic child could, I decided that my soul mate had died too soon and laid buried under that mass of soil and rock. *sigh* 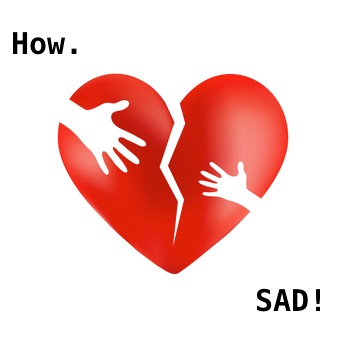 Do you believe in soul mates? Two thirds of Americans do, according to a recent Marist Poll, or more specifically, that “two people are destined to be together.” It’s a beautiful notion in many ways, but potentially risky in others.

Another study showed that 73 percent of married couples surveyed had settled for someone other than their one true love, “making do” because their soul mate got away. How sad is that? It gets worse. Forty-three percent of these people said they’d leave their spouse if their perceived true love appeared.

What saddens me about that statistic isn’t the fact that people would choose true love, but because I suspect that for many of them, the belief that a more wondrous love exists for them elsewhere keeps them from being fully present and growing in their current relationship. It’s easy to fantasize that Mr./Ms. Right could make life, or at least your romantic life, perfect, but is that even possible? If the grass is always greener in your soul mate daydream, won’t the grass in your own yard wilt away?

Quite possibly, yes. A study at the University of Virginia found that people who believed in soul mates were 150 percent more likely to divorce than people with realistic marital expectations. Yikes.

It seems to me that many folks long for a soul mate in order to be completed or fixed. “When I meet him/her, I’ll feel less lonely and miserable,” we might think. “The void will be filled, and I’ll finally be happy!” I’ve certainly been there in the past—but desperation to find someone attracts similar desperation and insecurity. I’ve also known guys who’ve tried to convince me I was their soul mate, seemingly as a way to have, rather than simply know or love, me.  I don’t think partners are meant to fix, complete or keep us. If that were the definition of soul mates, I suppose we should become our own. By embracing ourselves and living lives of passion, we can share a soul mate-type sparkle with most anyone—reserving the most for those we hold most dear. 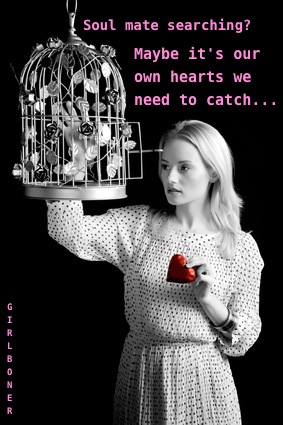 Love changes over time, but that doesn’t make it any less magical than sparkly Hollywood endings. When we hold reasonable expectations, we move from punch-drunk “I’m so high on you!” falling-in-love euphoria to a love that deepens over time. When we nurture all parts of that relationship and continue to work on ourselves, romance flicks can’t hold a candle to the unfolding gorgeousness.

I no longer believe that my soul mate died, leaving me to suffer alone from first grade on. But I do believe in kindred spirits, with whom we share a special connection and love of many kinds. I also believe they’re limitless in number. My husband’s one, my bulldog Zoe was one, and so are many of my friends.

When we choose to partner up with one special person for the right reasons, I’d hope that we all see them as a sole mate, and never feel we’re settling. I also hope that if that relationship ends, it’s not because someone seemingly better appears. We owe ourselves and our partners more integrity than that.

How you feel about soul mates and pre-destined love? Have your views ever changed? I’d love to hear your thoughts! ♥