“First love is a little foolish and a lot of curiosity.” — George Bernard Shaw 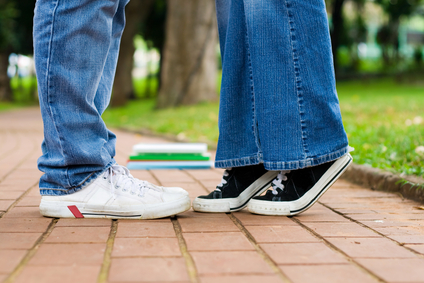 My high school boyfriend and I had been dating for two years before we had sex, becoming each other’s firsts. We’d just returned from a romantic walk under the stars when he pulled me close—young Juliet in Romeo’s gallant arms. With the lights in his bedroom turned low and Vivaldi sounding in the background, we gazed into each other’s eyes and simply knew: It was time. He carried me to the satiny sheet-topped bed and undressed me, kissing every bit of skin he revealed with gentle lips. After several songs worth of hungry kissing and fondling, he slipped himself inside of me, sending a shock of pleasure through my body. “I’ll love you forever,” he said. I kissed him then said, “Me too.”

That’s so totally not how it happened… Yes, we’d been dating for a while, but it was after a band concert that left me bored and sweaty in my none-too-cute blouse and slacks. He smelled like the fast food he’d just eaten, and the music was Def Leopard, not Vivaldi. We were making out on his bed in complete darkness, upon my request—anything to hide my body. Our clothes came off and the next thing I knew, his hardness was against my groin. We’d done this sort of thing before, sans penis entry. This time, he accidentally (or not) inserted the very tip, then stopped moving. “Uh, you know what we’re doing, right?”

I thought about it for a half-second then offered a casual, “Sure.”

“You know this means I’m going to marry you, right?” he asked moments in.

He donned the “just in case we decide to” condom we’d purchased weeks prior and inserted himself. I recall feeling an odd sensation, and thinking that it didn’t feel anything like I’d imagined it would. There were no firework-like pleasure explosions, no unwithholdable moans. It was more like getting fitted for shoes, only naked.

Quickly, sex became pleasurable, though I don’t recall when my orgasms entered the equation. I do know that once I really embraced my sexuality years later, everything about it strengthened. Rather than awkward yet enticing, sex became a crucial and glorious part of my life and self. Had I not taken a sexuality of women course, taught by my college mentor Olga Rockenstein, or overcome deeply engrained body image and self-worth problems, I may never have gotten there—or here, to GB Central.

If we aren’t taught to value and seek sexual pleasure, to view ourselves as beautifully sexual and deserving creatures, how can we have healthy, happy sex lives? Those of us who find that kind of empowerment, probably did not obtain it through sex ed.

“Boys’ sexuality is generally overtly linked with pleasure, for example, the insistence of the male sex drive, wet dreams and orgasm in the context of reproduction,” says Lisa Wade, Ph.d. “Sex education for girls tends to ignore any pleasurable aspects of sex, and instead focuses on the of pregnancy, abandonment, STDs, ruined reputations and rape.”

Celebrating female orgasm is a viable answer to these problems, Wade asserts. In doing so, we might also help rectify complications of an unhealthy sex life, from poor self-esteem and body image to clinical depression and obesity. 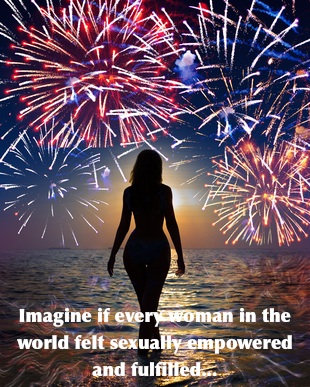 Roughly two-thirds of women aren’t sure if they’ve achieved orgasm, according to a recent Cosmo study. If you don’t know if you’ve had an orgasm, trust me, you haven’t.

“It’s like an overwhelming feeling of tingles throughout your body. You’re light-headed, your vision goes blurry, and all you can feel is an instant lightness of your body and amazing sensation in your clitoris.” —Chelsea

“I experienced one orgasm that almost made me feel like I blacked out. It started with that pulsating feeling, then my head was spinning, my body shaking uncontrollably. It was like a volcanic eruption…but down there. Then I collapse beside him, unable to move, think, or speak.” —Haley

“I know when it starts because every muscle begins to tighten and my upper thighs begin to quiver. I break out in a light sweat and it feels as if a faucet is being turned on inside me. I know the big O is complete when I feel like I need a snack and a nap.” —Nina

“It’s like melting and exploding at the same time. You don’t have any control and it’s maybe the only time in your life when you’re not worried about anything but that very moment.” —Jaimesa

Over the next few weeks, we’ll delve further into female orgasm—the how-tos, physiology and more. For now, I’d love to hear from you. If you readily orgasm, do you you recall your first? Was your first intercourse experience as anti-climatic as mine? Any stories to share? Questions about orgasms you’d like addressed in future posts? As always, I welcome respectful thoughts. ♥