Home • Authors • Funny on a Plane and NYC Wonder 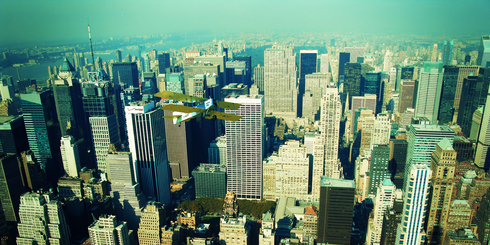 Travel can bring out the best, the worst and the flat-out funniest. My recent trip to ThrillerFest in New York City was no exception. After boarding the plane in Burbank, I settled into my seat, grateful to be yawning. Yes, I thought. I’m going to sleep like a baby. With the subtle rumble of the engine below, the beloved air-pillow I raved about in my travel post and my plush eye mask, how could I not? I felt no shame puffing air into the pillow. Passengers shooting me weird looks would soon be jealous, I figured. Or… not.

I was on my last puff when something snapped. A noise like nothing I’ve heard escaped my wonder-gadget—a loud, gaseous FWAAAAAPPPPPGGGHHHH!!!! The fuzzy mass whipped up in the air, nearly schwacked the woman next to me, then fizzled down into a limp, pitiful blob on my lap. So I did what felt reasonable at the time—acted like it was supposed to happen. (You haven’t heard of those fancy flat pillows? They’re oh-so-popular in Europe. Vogue-esque. Like sleeping on a down pillow, minus the…um…pillow.) I squished it into a lumpy ball, rested my head on it and pretended to sleep. Shortly later, a major neck cramp sent me upright. I spent most of the remaining flight watching late-night TV and daydreaming of the sleep I wasn’t getting.

I didn’t think much more about my flat-and-gaseous pillow episode until a cocktail mixer that night. I was walking around, chatting with authors when I spotted people I recognized. Minutes later, I was face-to-face with friends I’d formerly only known online. As we hugged and chatted, I felt as though I’d known them in-person all along. And when the proverbial “How was your flight?” question arose, I shared my exploding pillow story. Only then did I realize how darn funny it was.

Studies have shown that the way we present ourselves on social media tends to be realistic. (I’m sure there are exceptions—criminals who use alternate identities to manipulate others, for example.) And I believe that friends met online are real, not virtual. But if I hadn’t have met these blogging pals in person, I wouldn’t have heard Rachel Funk Heller‘s sing-song laugh, admired Amy Shojai‘s sparkly bling or Melinda VanLone‘s sweetness, exchanged knowing looks with Ingrid Schaffenburg who seems to understand, well, everything, or felt the tenseness in the room soften when during a serious discussion, Kristen Lamb said, “Today is the best time to be an author.” Running into Diane Capri and Lee Child on 42nd Street was another highlight; they are quite the handsome pair.

Connecting with others makes our lives fuller.

My favorite thing about ThrillerFest boils down to one word—people. Not just any people, but spectacular people who seem to “get” one another. (If there are so many of us, how can we possibly be crazy??? ;)) If you have the chance to attend a conference with people who share your passion, I hope you’ll go for it. It’s stimulating in way that’s difficult to describe.

I also spent time with my brother and his girlfriend—terrific people and artists, made new friends, met with my awesome agent, got a new request for my manuscript from a publisher (WOOT!) and had the opportunity to thank several authors in person for writing books I adore. Unlike many Hollywood celebs, the ultra-famous authors were giving and approachable. We aren’t in competition with one another, a couple of speakers said. I think that’s largely because we choose not to be. There’s plenty of room on the book shelves—and e-shelves—for more books and authors. If we choose to build each other up, we all grow—and not at the sake of our own success. Valuable lessons for anyone.

So I’m back in L.A. with my deflated air-pillow, which I haven’t had the heart to throw away. I’m pretty tired, but far more grateful.  Unlike the air in my pillow, the memories are sure to last a lifetime.

I’d love to hear from you. What’s your most hilarious travel experience? Have you made friends online, then met in person? What conference rocks your world?

As a reminder, I’m accepting “I’m a writer!” photos until July 21st. I’ve received some GREAT ones, and would love more. For basic information, visit The Freedom to Write.