It all started in 1990. My family had moved from a very diverse St. Paul area to the safer, if eerily homogenous, suburbs. On my first day of school, I wondered if my mostly Scandinavian could-be-my-siblings classmates derived from Stepford parents, which made my own existence much more interesting.

Before that school year started, I was confident of three things (four if you include my Stepford hypothesis): Paula Abdul rocked. The strict teacher I’d been cursed with didn’t. And soon my classmates and I would learn all about S…E…X.

Little did I know then where that class would lead. Based on my memory, here’s what happened:

I was sitting amidst a sea of students, some pale and fidgeting, others pink-cheeked and snickering, when Ms. Cloke,* aka Cruella Deville, started the projector.

“Welcome to sexual education…” Her frog-tone words blurred like the teacher’s voice on Charlie Brown in my horrified brain. “Wah-WA-wah-WA-wah…” Here I’d been hoping to learn the truth behind soap opera steam and all things hush-hush-adult. But Ms. Cloke’s voice was so…teachery. 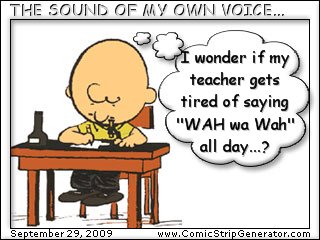 Huh? Muter mechanism, off. Now she had my attention. My eyes must’ve widened at the scientific drawing of a naked man on the screen, his penis pointing upward in firm salute.

It looks painful, I thought, keeping my view peripheral.

Jesus! Could she hear my thoughts?!? I stared at the floor, resisting the urge to scope the joint. Was that hidden in all the boys’ pants? This was sex ed, after all. Our bodies were changing…

Don’t look, don’t look! I scolded myself, my brain conjuring images of boys’ bulging crotches beneath neighboring desks. I shot a glance toward one. No bulge.

As I reviewed Ms. Cloke’s explanation, my nervous self-coaching took pause. If men had erections… What felt “quite good” for ladies?

Calmed by curiosity, I honed in on the lecture: More about erections, the triggers in boys and men, what men do with their standing penises during intercourse and something about women’s vaginas. That part, I’d heard.

Thank goodness we were on to vaginas. Surely Ms. Cloke would answer my pleasure question soon. So I waited. And waited. And…waited.

“When women begin adolescence…” she began.

Here it comes! Another click. A new slide, featuring—

Maxi pads. Tampons. Discussion of womb-shedding, bleeding, swelling and cramps. A week every MONTH?!? Fantastic. One quarter of the rest of my life would consist of bloody pain.

Class ended, leaving me in a state of crestfallen confusion. Not once throughout sex ex did Ms. Cloke mention female sexual pleasure. Not that I was longing for it then. I just deemed the whole thing unfair. Guys gained fun special effects. Gals? We bled. (Was that what drove my girl Paula to sing Cold-Hearted Snake?!?) The one takeaway I’d hold onto for years: Never wear white pants. Ever.

Not bold enough to pose my questions to anyone, particularly Ms. loved-to-punish-kids Cloke, my curiosity accompanied me through puberty. While men all around the world had bulging, feel-good genitals, I bulged with curiosity constipation. Anytime someone spoke of sex at school, in public or on TV, I listened—not in a sick way. I just wanted to know, without being deemed crazy, idiotic or un-Christian for wondering. The first time I heard an erection called a boner, I wondered, “What about girl boners?”

It would be years before I had an answer. Since then, girl boners have gone from perplexing puzzles to a passion, and not just for me personally. I want every woman to experience, embrace and celebrate her sexuality, and feel deserving and confident about doing so.

The truth is, there is no broadly used term specific to female arousal. (Think how many we have for guys. My slang thesaurus lists 22 synonyms for the male boner alone.) Multiple websites and thesaurus searches for ‘female sexual arousal’ draws up Persistent Sexual Arousal Syndrome, as in a disorder, as a top hit.

On some level, I understand why there isn’t a universal word for female turn-on. It’s not as though women experience one primary or obvious change. But words hold power. Giving a positive term to female sexual arousal and pleasure makes both more probable, making the whole world a better place, IMO.

I believe that women would experience less depression, better body image, a lessening of relationship strife and greater personal security if we were taught to cherish our girl boners. While we’ve come a long way in these regards as a society, significant work remains.

I could go on and on (and on…) about girl boners and my journey from sex ed to the present, which is why I’ve not only decided to trademark the term, but make it an ongoing series on my blog. I’m committed to keeping the tone and information upbeat, and hope you’ll all engage in equally fun and respectful discussion. And yes, guys and gals are equally welcome.

I should also mention for any newbies that I’m not a sex therapist or doctor—simply an empowered woman who embraces her sexuality and uses her professional health writing and researching skills to dig deep and relay what she learns. I’m also quite fond of sharing, so more personal stories will follow. (Fear not, exes. I’ll change your identifying details as I did Ms. Cloke’s.*)

I hope you’ll join me next week as we discuss girl boner physiology: what actually happens when we get turned on. Until then, I’d LOVE to hear your thoughts. Do you remember your first sex ed class? Any funny or interesting stories to share? Are you as stoked about girl boners as I am?!?