How do you feel about high heels? Does the thought of ex-naying them from your wardrobe for a year sound daunting?

If not, kudos! I admire you, just as I admire the women who were turned away from the Cannes Film Festival for wearing dressy flats instead of heels.

That news angered me, but I was in also awe of those women for arriving to a world-renowned upscale event in flats. FLATS! I’m embarrassed to admit that for me, that would have taken courage. 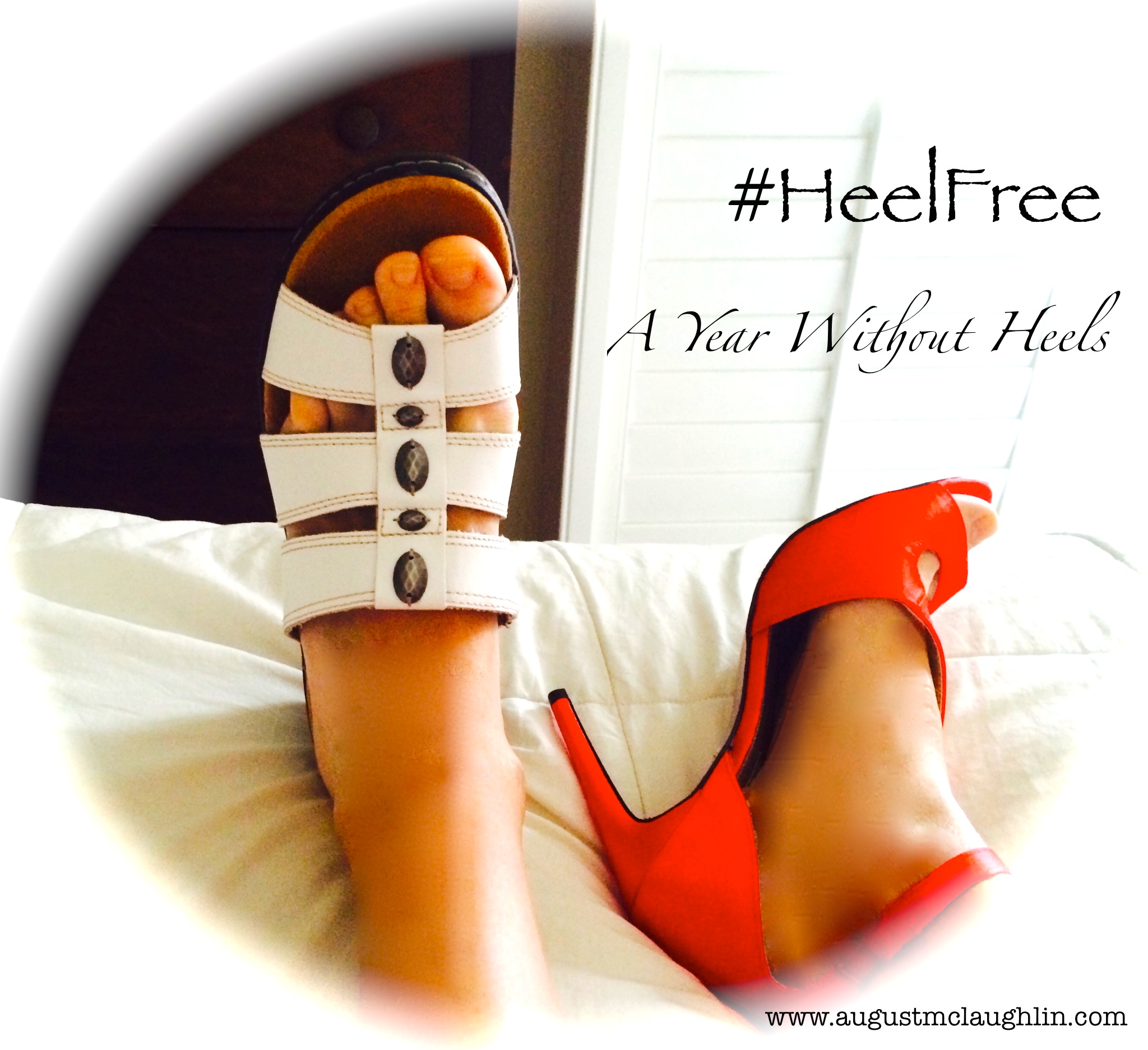 A bit of personal history:

Until age 16, I felt pretty neutral about height, mine included. My parents’ heights vary by about a foot, and my siblings and I all fall about midway between. While I’m considered tallish, there was never any emphasis on one height range being superior to another.

I’m grateful for that, particularly considering my other insecurities. I deemed my naturally thin, small-framed body chubby from about ages 5 to 25. It’s called body dysmorphia, and it’s no fun.

During my sophomore year of high school, I started modeling—a shift that stunned, delighted and terrified me. When my agents didn’t mentioned my perceived extra pounds, I wondered for the first time if I’d imagined them. Maybe I was just fine, attractive even, as I was.

That all changed after my first editorial photo shoot. At the end of a long, gratifying workday, the photographer looked me in the eyes and said, “You could be working in Paris….if you lost 10 or 15 pounds.”

In effort to soften the blow, numerous industry professionals and fellow models assured me it was because of my height.

“It’s not that you’re fat,” one said. “It’s just that shorter girls have to appear taller, like an optical illusion.”

Another explained that to give that “hanger” look—as though the apparel hung on a clothes hanger, versus a human—I had to look as long and lean as possible. I couldn’t change my height, she said, but I could alter my weight. Proportionately, it would all work out.

With my insecurities about my weight seemingly validated, I began shedding pounds and my already vulnerable sense of self. Not only was I indeed overweight (by industry standards), but displeasingly short? Both words seemed like F-grades on the exam called Life. So I traded normal meals for restriction and my loafers for heels.

Fifteen pounds and hundreds of steps in heels later, I landed a prestigious contract with a modeling agency in New York City, where I wore heels so frequently, I felt as though I was walking uphill without them.

A few years later, the photographer’s prediction proved true. While living and working in Paris, I nearly died of anorexia. It took nearly a decade, but I’m now fully past the eating disorder and the dysmorphic self-perceptions.

Healing from an eating disorder is often a live-or-die situation. I chose life, which required dealing with demons I’d carried for decades. That process brought me to a place of body- and self- embracement I wish more women experienced. I prize authenticity more than almost anything, and have virtually no negative thoughts about my body or aesthetics. If I fixate on anything, it’s my passions.

So why did the thought of not wearing heels for a year make my palms sweat?

Is this an old wound I’ve overlooked? Lingering insecurity that fell through the cracks? I plan to find out…

I haven’t worn heels as often in recent years, partly because I primarily work from home. But whenever I attend an important event, be it a glamorous night out or a public appearance, I’ve considered them essential. Do I place my sense of self-worth in my height or footwear? No. But I do feel more attractive and, in some ways, empowered by them. To be honest, they feel like a crutch (which is ironic, seeing as wearing them raises my risk for needing crutches…). I’ve also suffered some harsh side effects of the tall, angular shoes, which I’ll explore in another post.

My discomfort at the thought of going heel-less made me so uncomfortable, that I’ve launched a campaign. Whether this will remain my own personal venture or one shared by many, I don’t know. What I do know is that the experience is already strengthening me. I haven’t worn heels since this idea struck me a few weeks ago.

Until June 1, 2016, I will not wear high heels. Instead, I’ll choose comfortable, supportive flats, clogs, athletic shoes and boots. Throughout the year, I’ll post updates on my experience and research here on my blog and on social media (Instagram, Facebook and Twitter), using the hashtag #HeelFree.

Will I wear heels again thereafter? No idea. At the moment, I suspect so. But a lot can happen in a year.

I’m doing this in honor of the women who were turned away from Cannes for wearing flats. It’s part social-experiment, part person-growth challenge—one that I hope will benefit others.

One thing my journey has taught me is that the most uncomfortable steps we can take often prove to be the most empowering. We can’t know the rewards, or how deeply (or not) an insecurity is holding is back until we face it, head on. So, off I go!

I am NOT doing this to shun women who wear heels, or suggesting that everyone should give them up. I realize that there are ways to more safely work heels into one’s lifestyle (wearing certain brands/types, lowering the frequency, etc.). I also recognize that some women are criticized for wearing heels for various reasons; I’ll explore that, too, as part of this series—while sticking to my #HeelFree mission. This is simply my journey, which I hope others will learn from.

If you’d like to support my #HeelFree mission, here are some ways:

How do you feel about heels? If you wear them regularly, could you give them up for a year? Will you? What’s your footwear/height story? I love hearing from you! ♥