“I don’t mind working, holding my ground intellectually, artistically; but as a woman, oh, God, as a woman I want to be dominated. I don’t mind being told to stand on my own feet, not to cling, be all that I am capable of doing, but I am going to be pursued, fucked, possessed by the will of a male at his time, his bidding.” — Anaïs Nin 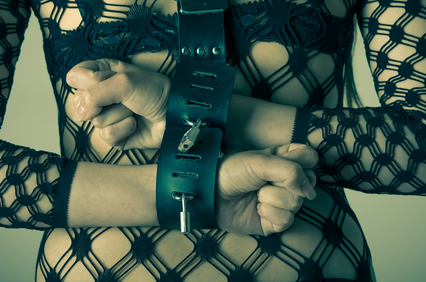 On the surface, rape and domination fantasies can seem bizarre, perverted and unhealthy. Why would a woman dream lustfully about such a deeply violating act? Well according to many sexual health and psychological experts, such fantasies aren’t only common, affecting an estimated 30 to 60 percent of women based on collective studies, but A-okay. For some women, they may even prove therapeutic.

I recently began watching Dr. Laura Berman’s Showtime series Sexual Healing, a program that chronicles couples working to overcome sexual and relationship problems under the counsel of Laura Berman, PhD. The first installment features Brandon and Sabrina, a young couple grappling with reduced sex drive. Though they’d had an active, healthy sex life previously, Sabrina’s earliest sexual experiences were deeply traumatic. Throughout her early childhood, she was molested by a temporary step-father.

During a one-on-one session, Dr. Berman asks Sabrina what she fantasizes about sexually. Here’s a clip from their chat:

Sabrina: I need someone to rip off my clothes…and he’s so nice, so gentle.

Dr. Berman’s insight really struck me, having never experienced or fully understood rape fantasies myself. Witnessing the lightbulbs of empowerment that seemed to flash in Sabrina’s head as she began to see her desires for what they really are—a chance to heal wounds from her past—gave me chills! I can’t imagine such revelations, paired with her willingness to work through challenges her loving beau, not shifting her sense of self-worth and sexual embracement toward the better.

Another woman on the program, the most shy and conservative of the bunch, shared a fantasy in which a man enters her home and rapes her, “taking her from behind over the sofa” until the act gradually becomes pleasurable. Then he forces her to prepare food for him (interesting, considering the fact that she hates cooking). She makes him a sandwich before he “takes her” again, this time on the kitchen table. Because she considers herself prudish, she told Dr. Berman that she associates her fantasy with knocking down her inhibitions and thinking more freely.

“Fantasies allow us to experience the outer limits of our imaginations safely, with no risk–and for some people, that includes fantasies of coerced sex,” writes Michael Castleman, MA, author of All About Sex. “In fantasy everything is permitted and nothing is wrong.”

1. The thrill of desire. Robert Frost called love “an irresistible desire to be desired,” and for good reason. Little feels as good as being wanted. While the actual act of rape isn’t about sex but power, says Dr. Berman, rape fantasies are all about sexual desirability. To be so desired that a man (or woman) can’t help but rip a woman’s clothes off and go to town on her body provides many women a sense of euphoria.

2. Permission to experience pleasure first, without worrying about performance. Unlike actual sexual violation, rape and domination fantasies involve pleasure. “When you restrain her, it means she has permission to experience pleasure without having to worry about being good in bed or returning the favor,” says Cosmo writer Caroyln Kylstra. This is one reason women particularly prone to people-pleasing, putting others’ needs before their own, are more likely to fantasize about being aggressively taken.

3. Permission to be sexual. In a society that over-sexualizes women in entertainment and the media while encouraging hush-hush attitudes about sex most everywhere else, many women experience intense shame when it comes to expressing themselves sexually. “Rape fantasies allow them to explore their sexuality without embarrassment, as they are being taken against their will, at least mentally,” said Dr. Berman. Doing so allows women with sexual shame freedom to savor the experience, she says, without feeling embarrassed or dirty.

4. Societal teaching. Women and men are exposed to countless illustrations of male dominance/female submission in todays’ culture, and both genders tend to internalize these roles, according to research summarized in Personality and Social Psychology Bulletin. We tend to desire what we know, particularly if we haven’t challenged these beliefs.

If experiencing rape or domination fantasies in your mind or bedroom* heightens your sexual satisfaction, closeness with your partner or emotional healing, I say DREAM ON—knowing that there’s nothing wrong or “dirty” about you. If not, well, there are countless other fantasies worth having…

*Acting rape and domination fantasies out can be healthy and safe with a trusted partner in safe quarters, say psychologists, but some are best kept within—particularly if they involve significant pain or harm, strangers or acts your partner doesn’t feel comfortable with. If you’re struggling to cope with or manage your own fantasies, guidance from a trusted professional can go a long way.

Have you had domination or rape fantasies? Were you surprised to learn that, addressed properly, they can provide healing? What themes do you see in your fantasies? What reasons would you add to my list? I love hearing your thoughts! ♥ You can also chat with me and the Girl Boner community on Facebook and Twitter.