“Sex is like flypaper to the average murdering psychopath, and anyone who wishes to participate in it during a horror movie is going to die horribly, probably mid-coitus.” – Cracked.com 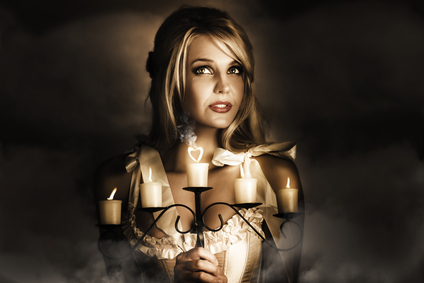 Amber: Popular girlfriend of Jason (male lead/college football star), blonde and blue-eyed, beautiful, but with hint of mischievousness – think Exotic meets Girl Next Door. After seeing Jason kiss her best friend, she runs away, has sex for the first time ever with Jason’s geek brother Tom, then gets lost in the woods where she is attacked by werewolves.

With a description like that, wouldn’t you just love to be Amber? I wanted to, badly, leading up to my audition for the indie film role during my acting days. My heart aches a bit, recalling how fervently I tried to bring depth to the countless lovely yet dim-witted or smart but dangerously seductive characters I portrayed. Huddled with other actors at my coach’s studio, we’d take turns exploring the emotional layers that hid beneath our characters’ ruses.  “Kim” was as insecure as anyone, I’d assert, and simply played her “dumb” card for attention she felt unworthy of. “Jessi” wasn’t using her sexuality, so much as seeking and celebrating it the only way she knew how; it only appeared that she was pushing her boobs in guys’ faces then treating them heartlessly. (Sometimes boobs just, you know, fly up there! And sometimes you really do need to wash your hair on Friday night…or accidentally stab a guy.)

If nothing else, the preparation made the characters more appealing to portray, staving off the sense that I was selling out. Giving my all to every role I played seemed crucial to my craft and career, both of which I took seriously. There are supposedly no “small parts,” after all. It took me a while to realize that my preparation—adding depth where none was desired—may’ve worked against me, preventing me from landing many of the roles I’d hoped might lead me to grander pastures.

One casting director told me to not to “think so hard,” that the character was “light and perky” and that something about my portrayal seemed too introspective and mature. Another suggested I be less articulate. “Think bimbo barbie,” she offered with a laugh.

I believe Sanford Meisner’s theory, that the best acting involves living truthfully in imaginary circumstances. (Similar notions apply to great writing, in my opinion.) The problem with Amber and characters like her is that they make authentic portrayal nearly impossible, without extreme stretches of one’s imagination. Why? Because sexist stereotypes, such as the “dumb blonde” persona, aren’t truthful. Sadly, they cement and perpetuate the false notions, leading the masses to take them seriously on some level—even when it’s all in the name of good fun.

With Halloween on the horizon, I decided to go through some of the horror scripts and audition scenes from 5 or 6 years ago. Here are a few patterns I observed, with very few exceptions:

♦ The female lead (Perky Popular Girl) is likely to walk directly into obviously dangerous situations she’s terrified of, alone. When the monsters or intruders attack, she’ll stop like a stunned deer, tremble and cry then attempt to claw her way out of the situation by flailing about.

♦ Popular Girl must house her perky breasts in a powerful pushup bra (my breasts have been taped in place – OUCH) and maintain salon-chic, if romantically tousled, hair and makeup, even after being chased through a dark wood or stuck in an abandoned cabin, car or camper for days on end.

♦ Chaos will undoubtedly unfold during a rainstorm, in which Popular Girl’s perky, pushed-up breasts will have no choice but to make themselves (much more) known. As she runs frantically through the rainy wilderness, she’ll fall down  many times.

♦ The sharpest female character will be a gawky, unpopular, non-blonde virgin, and likely Perky Popular Girl’s adversary. Desperate to be “cool,” but loathing female peers who are (while possibly lusting after Mr. Cool Asshole), she’ll outlive her “oversexed” (having any sex) counterparts.

♦ If Perky, Popular Girl and her stud-muffin beau are sexually active, the monsters/evil forces/psycho-killer will transform them from lust-filled lovers into a bloody pulp—or, if they’re lucky, vengeful zombies.

Some psychologists theorize that sexual stereotypes are perpetuated in horror films because we, as viewers, have been socialized to associate Barbie-like women and studly “bad boys” with sex. Filmmakers want to arouse viewers on multiple levels—and little gets our adrenaline flowing like sexual arousal.

Sexual arousal is a GREAT thing, as everyone at Girl Boner Central (including you fabulous readers!) well know. What saddens me is how many of us witness these ideals without recognizing the potential harm. (It’s extremely easy not to, considering their abundance.) Even if we have wonderful intentions, the notions can creep into our subconscious, strengthening society’s hurtful messages that we have to look and act a certain way to be considered attractive and valuable, and that sex is a dark, insidious and risky practice reserved for certain people—who, if they’re young, will be severely punished.

While I don’t think it’s necessary to avoid horror flicks or other films with sexist themes, I do think it’s important to recognize the damaging stereotypes, and for those of us who wish to change these stereotypes—and ourselves, for the better—to dig deeper. Asking questions, forcing ourselves to look beyond the surface of entertainment (even when it’s unpleasant), supporting and creating sex-positive works and engaging in conversation about these issues can go a long way. We’re not likely to gain Hollywood happy endings quickly or soon, but every step matters.

We’ll explore these topics further in upcoming posts. In the meantime, I’d love to hear from you! Does sexism or other stereotyping in horror films bother you? Which stereotype irks you most? Any commonalities to add to my list? Don’t be shy! Here in GirlBoner-land, we welcome all respectful thoughts. ♥