We are weaned from our timidity

In the flush of love’s light

we dare be brave,

And suddenly we see that love costs all we are

and will ever be.

Yet it is only love which sets us free.

Within minutes of arriving to New York last week I was propositioned by a 12-year-old and nearly overrun by a woman who appeared to be at least 100, yet moved as fast as a spritely racewalker, while a street musician serenaded an ignorant crowd. Such boldness isn’t common everywhere, but you can observe it routinely in NYC. I don’t think anyone can live in, or even visit, the megalopolis without some amount of bravery. The city is as crowded as it is diverse, the world’s epicenter of numerous competitive industries and—best of all—built on individuals’ dreams.

Before moving there in my late teens, I wrote in my journal: “I’m not scared, just excited. Or maybe I am scared. Maybe I want to be.” Naive as I was then, I had that latter part right. I’m pretty sure such feelings are universal. Fear can be exciting, in moderation.

This recent trip, I was abuzz over something else—the singing gig I explained last week. I spent time beforehand having a breezy blast with my brother and his girlfriend in Brooklyn. Beneath my calm lingered frequently spasming fireflies. (‘Butterflies’ now seems too tame…) I had at least 50 moments of, “Oh my God. SINGING!” and had to urinate nearly as many times.

Since guitars are difficult to travel with, I rented mine’s clone—the same make and model—from a shop in Midtown. Picking it up was more comforting than donning world’s comfiest jeans after a long day of glamming it up in a dress and heels. (SIGH…) The same thing happened when I spotted the stage, recalling the countless times I’ve seen one in recent years, longing to hop up onto it. I also thought those of you who shared personal fear-facing stories and offered support beforehand. (Have I mentioned how inspiring and fierce y’all are???)

I wish I could say that the fireflies buzzed off and I morphed into folk-style Bonnie Raitt onstage, but…nope. Each time I noticed a flareup, I refocused on whatever song I was singing—its meaning and why I’d written it. My nervousness and imperfections became trivial, and I ended up having a blast. 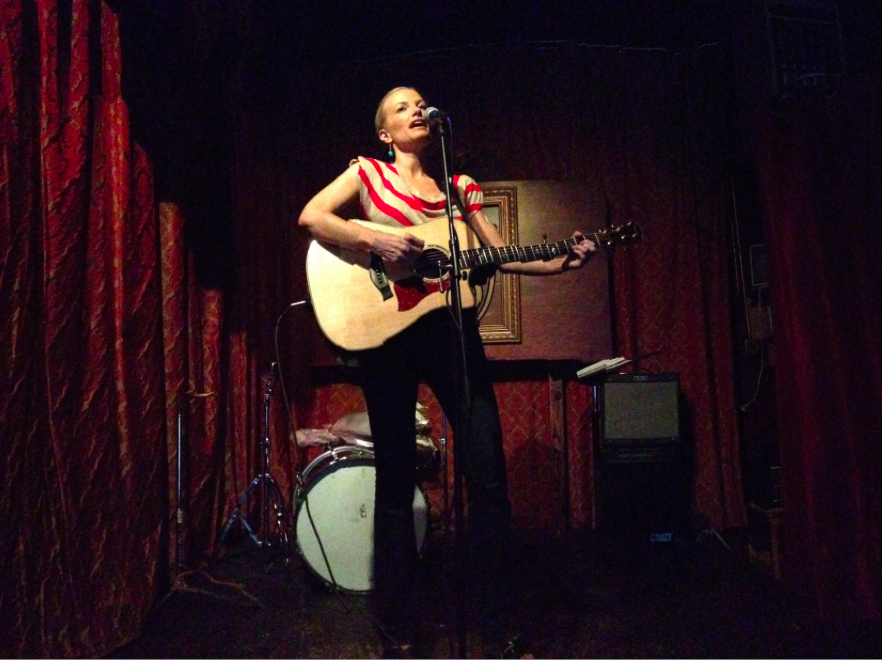 The experience affirmed what we’ve been discussing here—that courage derives from love. We love something more than we fear the price of reaching it, and that love propels us through the freaking-us-out fire. Gradually (hopefully!) love takes over, showing fear who’s boss and inviting myriad rewards.

While this isn’t typical Monday material, it ties directly into what Girl Boner stands for—living full, passionate lives and not allowing insecurities, naiveté or ignorance hold us back. Our lives should be rich with passion and sensuality, both of which extend far beyond intercourse and masturbation (though obviously, also awesome!). They illuminate our souls, radiate outward and have the capacity to change or even save lives. I doubt my performance saved any lives, but it certainly enriched mine. Therein lies strength and beauty, particularly since we’re only as good for others as we are emotionally fulfilled ourselves, IMHO. But that’s another topic! For now, I’d rather hear from you.

What has facing a particular fear taught you? What would you do if you weren’t afraid? What’s the wildest dream you can foresee chasing—if not now, then someday? There’s no judgment here, so dream away! We won’t slash a whip or hold you to it unless you ask us to. And be sure to join us next Monday as we delve further into all-things-saucy.

If you’re interested in seeing my performance, it’ll be available on my Facebook author page shortly. In the meantime, you can watch it here. Pardon the opening act, my bobbling head. LOL That only lasts a few minutes—promise!

Happy #GirlBoner Monday. I hope your week’s off to a brilliant start!