Sometime during high school, I watched The Dead Poet’s Society on VHS. I remember thinking, “This’ll be good,” before watching it, and “Holy crap, that was awesome!” at the end. Watching the two-ish hour film felt more like living years within the character’s lives. I laughed, cried, wondered and learned along with them. The story made me examine my own life and decisions, and has stuck with me since.

Marc Schuster’s The Grievers reminds me of The Dead Poet’s Society, only slightly because it involves a prep school. The relatively short book felt as rich as a series. I laughed, ached and learned, thanks to the main character, Charley. (Did I mention laughed?) He had me pondering my own life and changed the way I look at the dancing chickens on Hollywood street corners…forever. Though it’s not been long since I read it, I have no doubt I’ll think of The Grievers again in the coming years. In a word, I found it inspiring.

Synopsis:
When Charley Schwartz learns that an old high school pal has killed himself, he agrees to help his alma mater organize a memorial service to honor his fallen comrade. Soon, however, devestation turns to disgust as Charley discovers that his friend’s passing means less to the school than the bottom line. As the memorial service quickly degenerates into a fundraising fiasco, Charley must also deal with a host of other quandaries including a dead-end job as an anthropomorphic dollar sign, his best firned’s imminent move to Maryland, an intervention with a drug-addled megalomaniac, and his own ongoing crusade to enforce the proper use of apostrophes among the proprietors of local dining establishments.

Desperate to set the world right and keep his own life from spiraling out of control, Charley rages through his days and nights, plotting all the while the ultimate eulogy for his deceased friend and a scathing indictment of a world gone wrong. (The Permanent Press, 2012)

The Grievers officially releases today. (CONGRATS, MARC!) I’m so thrilled to bring you insight from the author himself… 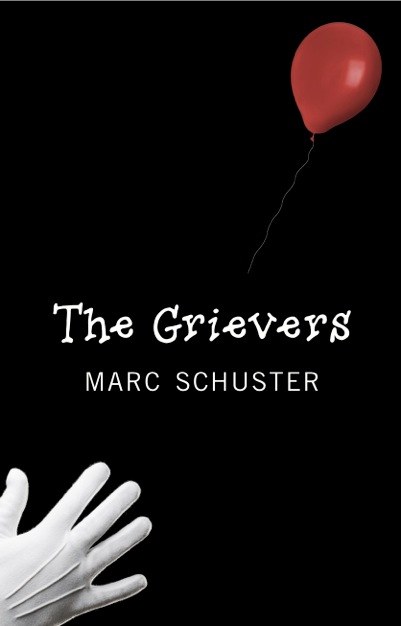 AM: You’ve called The Grievers “a coming of age story for a generation that’s still struggling to come of age.” What did you mean by that?

MS: There’s such an emphasis upon entertainment in our culture that we’re losing the ability to take things seriously. We’re really into melodrama, into quick laughs, into anything that amuses us. Look at The Daily Show for example. I love watching it, but there’s something mildly disturbing about the fact that I get a lot—if not most—of my news from John Stewart. It’s like I can’t digest serious information without a heaping teaspoon of humor to help me get it down. What does this say about me? About people of my generation? When am I going to start taking things seriously? Questions like these were in the back of my mind as I was writing the novel, and they’re also the kinds of questions that plague its narrator.

AM: Tell us about the main character, Charley Schwartz. How similar is he to you?

MS: It’s probably fair to say that he’s an extremely exaggerated version of myself. What separates us, I hope, is that I think before I speak, whereas Charley is a lot more impulsive. As a result, he puts his foot in his mouth far more frequently than I do. In terms of biography, though, we do have a few things in common. We both went to prep schools in our teenage years, and we are both the products of our respective educations. Perhaps most importantly, Charley and I have extremely patient wives who let us know when we’re making fools of ourselves. The difference, again, is that I usually have the good sense to listen, whereas Charley doesn’t.

AM: The Grievers presents numerous lessons. Was that intentional?

MS: I don’t think I set out to teach specific lessons as I was writing. Had I done that, I’m pretty sure those lessons would stifle the novel, or it might come across as preachy. Instead, it’s probably a matter of having certain values, beliefs, and assumptions in the back of my mind as I was writing, and they crept into the finished product on an unconscious level.

AM: You came close to self-publishing The Grievers some years back. What prompted you to consider that option and then change your mind?

MS: I’d written a few novel-length manuscripts by then, but The Grievers was the first one that I thought really had potential for publication. Unfortunately—or so I thought at the time—agents and editors didn’t agree with me. So I imagined self-publishing might be the way to go. At about the same time, I wrote a fan letter to Chuck Palahniuk in which I told him about the book and my plans to publish it on my own. He wrote back saying that he liked the idea for The Grievers, but he urged me not to self-publish. His point was that instead of putting my efforts into publishing the novel, I should start working on a new one and then return to The Grievers with fresh eyes. In the end, I decided to take his advice, and I’m glad I did. Setting the manuscript aside for a couple of years gave me the perspective I needed to do a thorough revision, and having another novel published in the interim taught me a lot about publishing.

AM: You’ve shared some great deleted scenes from The Grievers on your blog. How did you decide what to cut and keep?

MS: In many cases, the cutting had to do with the pacing of the novel. I might, for example, realize that I’d already established an idea or theme and cut a passage because it was redundant. In other cases, I was striving to make the novel as much a work of fiction as possible. The germ of the story started with my own life and observations, but for the novel to work as a piece of fiction, I felt I really needed to make Charley his own person. So I cut anything that struck me as too autobiographical. The final thing that helped me decide what to cut and what to keep was input from other readers. I’m fortunate to have a lot of avid readers in my life, so I had a lot of very strong, very informed opinions to draw upon. If someone I respected enough to show the manuscript told me that something wasn’t working, we’d talk a bit about why and whether or not it was something that could be fixed or simply didn’t fit. If, in the end, we decided it didn’t fit, I’d cut it.

AM: Any chance we’ll see it on the big screen someday? (Spielberg might read this. You never know…) Who would you cast as Charley?

MS: I could definitely see Jason Schwartzman as Charley. I loved him in Rushmore, and to an extent, I see an affinity betweenThe Grievers and that movie. Charley could conceivably be described as an adult version of Schwartzman’s character, Max Fischer.

AM: You’ve received some awesome praise from reviewers. (Congrats, by the way.) Do you have a favorite? Any nail your book on the head or surprise you?

MS: Thank you! I’ve been so flattered by all of the praise that the book has received. A blogger named FP Dorchak made me smile when he wrote, “To be utterly blunt if not politically correct, this book had me laughing my ass off.” But I’m also glad that reviewers are picking up on the balance between humor and tragedy that I tried to bring to the novel. Robin Black is an author I admire immensely, so her praise also meant a lot to me: “The Grievers is a an extraordinary weave of humor, insight and intelligence. Marc Schuster has written a perfect comic novel, one that never strays far from either poignance or hilarity.” He book If I Loved You, I Would Tell You This is one of my favorite short story collections.

For more information, check out Marc Schuster’s blog and follow him on Twitter. To purchase The Grievers, zip over to Amazon.com or Barnes & Noble.

Any thoughts or questions to share with Marc? I’m sure he’d love hearing from you!