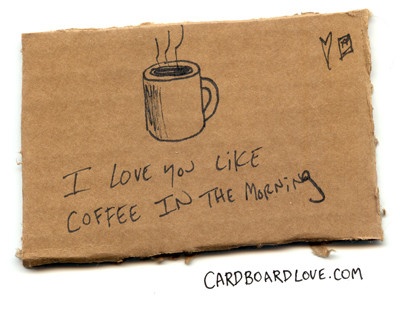 According to a recent study conducted by Le Meridien Hotels and Resorts, many folks would rather love coffee than a partner in the morning, IYKWIM. After surveying 7,455 male and female coffee drinkers from the U.S., China, France, Dubai, India and Germany, researchers found that 53% of the participants would rather wake up to hot java than hot sex. (They also chose coffee over other recreational activities, such as perusing Facebook.) Seventy-eight percent of participants claimed they would rather give up sex with their spouse for an entire year than surrender their morning coffee habit. (What?!?) Perhaps it’s not that shocking…

They’re caffeine-addicted, and can’t function well without it. Caffeine is the most widely used behaviorally active drug worldwide, according to Johns Hopkins Medicine. Eighty to 90% of adults in N. America report regular caffeine intake, with an average equivalent of one to two standard mugs of coffee per day in the U.S. If you experience foggy thinking, irritability, headaches or nausea if your morning coffee is delayed, you’ve grown dependent. These symptoms of caffeine withdrawal, which has recently been added to the Diagnostic and Statistical Manual of Mental Disorders as a condition, can definitely tinker with libido.

They’re sleep deprived. Sleep deprivation is epidemic in the U.S. The National Health Interview Survey showed that 30% of adults reported sleeping 6 or fewer hours per night between 2006 and 2007—and most of us need 7 to 8 nightly hours. Even an hour of sleep loss can have major detrimental effects, which is another topic entirely. From a sexual standpoint, getting enough sleep is important because exhaustion is the leading cause of low-sex drive. It only makes sense that morning caffeine, sleep loss and disinterest in sex go hand-in-hand.

They just REALLY. LOVE. COFFEE! And/or aren’t likely having frequent or mind-blowing sex anyway. Coffee may seem to trump sex if your sex life is lackluster, which can stem from a whole variety of factors, but there’s really no comparison between coffee’s flavor and pick-me-up perks  and the orgasmic euphoria of S-E-X. Both offer wellness benefits, but very few activities promote as much physical and emotional pluses as sensual play and climax.

They want to feel refreshed before getting down and decadent. I can relate to this one. I generally prefer to at least empty my bladder and brush my teeth before engaging in morning sex. And if I wake up mentally hyper (a fairly frequent occurrence), I may need to run a quick lap beforehand. :)) If coffee is part of your wake up and face the day ritual, it makes sense that you might desire a cup or two before having sex. If you end up in a time crunch, having to choose one or the other, I recommend setting the timer on your coffee pot and moving it closer to your bedroom.

I had to add bacon to the mix! When I posted this photo on the Girl Boner Facebook page, I was amazed by how many commenters voted for bacon! Only one other female and I said sex, hands down. Many guys demanded both.

I’ll admit, I don’t quite get the whole bacon craze that’s been happening lately. I don’t much like or eat it, partly for ethical reasons. Regardless of those…it’s just salty, aromatic meat! (Um…)

Apparently, many people disagree with me. A survey conducted by Maple Leaf Foods, Inc. showed that 43% of Canadians would choose bacon over sex, given the choice. Eighty-two percent of the respondents who reportedly love bacon also claimed to be great lovers, and 81 percent found bacon to be romantic. The meat’s aroma was a big draw for males.

Do you find it odd that many people reportedly enjoy morning coffee or bacon over sex? Are you one of them? How do you feel about morning sex overall? What other food/drink do you love nearly or as much as sex? I love hearing your thoughts! ♥