Home • Girl Boner • Why Periods are a Feminist Issue

Menstruation jokes aren’t funny. Period. ? Okay, some are… Shame and stigma around the natural biological function, however, aren’t so humorous.

I recently sat down with the witty and insightful Swedish YouTube star, Clara Henry, whose videos and book about periods are material I wish all people with uteruses had early on. Clara hadn’t expected to become a celebrated menstruation expert, then one day a simple tweet several years in to her YouTube career set her on that path.

“I tweet about everything in my life,” she told me, “and since I’m menstruating one-fifth of my time, obviously I’m going to tweet about my period.”

She tweeted about her cramps once, then again the following month, hoping laughing about them might make the pain more tolerable. Then someone replied: “Clara, why do you always tweet about your period?”

But did she? Not even close. Realizing that period talk draws reactions because relatively few people engage in it, Clara decided to create a video about cramps, which drew a mix of reactions.

Part of the audience found it gross, suggesting she keep her period to herself. Others related and cheered her on. Her audience at the time consisted of many young folks, many of whom had never talked about menstruation. Suddenly they had an entertaining mentor to help them through rough patches by shedding light on a the taboo subject they were living with.

“I was kind of blown away by the responses,” she said. “I loved the positive comments, and the negative comments made me want to speak even more about it.”

Clara has done precisely that, going beyond the basics of period-related issues and her own experiences to explore menstruation as an important feminist issue and pen the book, I’ve Got My Period. So What?, which became an award-winning hit in Sweden, has been translated into numerous language and released this month in the U.S. 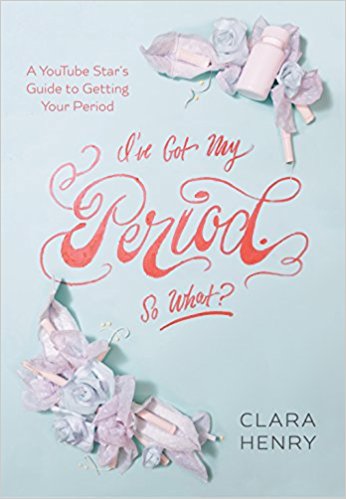 “What if men had PMS?” she said of periods and feminism.  “I think that would be seen as something deep and political and they could go into themselves and be dark and difficult, while women are seen as hysterical. That’s such a common word to describe women, and that’s a real problem.”

When I asked Clara what she’d say to someone experiencing shame around menstruation, she shared the following positive notion I adore:

“I’ve always thought that this is an internal bleeding that I don’t need to call 911 for… I’m such a badass girl that I can survive this every month. And think it’s cool.”

Listen to our chat on iTunes, iHeartRadio, Stitcher Radio or here:

The episode also features:
To purchase Clara Henry’s book, I’ve Got My Period. So What?, on Amazon, click here. Find it at Barnes and Noble here.