How do you feel about pleasure? Do you prioritize it as prominently as, say, your physical health or work responsibilities? If you’re like many folks, particularly here in the U.S., likely not. Your own pleasure might feel trivial or even selfish to pursue, for understandable and well-worth-addressing reasons.

I was delighted to share Girl Boner Radio time with Jamila Dawson, LMFT. As a therapist with a master’s in clinical psychology, Jamila presents nationally on sexuality, neurobiology and wellness and works with people in a private practice setting. Her mission? To break down sexual stigma in order to design relationships that center imagination, connection and liberation. Even one conversation with Jamila could have you rethinking the role pleasure plays in your life and the revolutionary growth that can stem from its embracement.

Together we explored these topics, as well as ways to start thriving after trauma, the link between creativity and eroticism, moving away from gender binaries and more. Listen to the full episode on Apple Podcasts, iHeartRadio, Spotify or below! Read on for a few highlights.

The episode also features wonderful thoughts from Dr. Megan Fleming for a listener who’s felt anxious about having sex with her partner since his heart surgery.

Having grown up in a socially-conservative household with parents who worked in the medical field, Jamila absorbed mixed messages about sexuality. On one hand, she recalls learning that you can talk about bodies. But she also learned that you shouldn’t talk about sex, a topic she found endlessly fascinating. At a certain point, she spotted an employment ad that would change the course of her life…

JAMILA: I was working at a film production company that was going to go under and I happened to see on Craigslist for a woman-owned and operated adult store. And I was like, “Here’s my chance. I don’t know what this means, but I want it.” So I got hired and I loved it.

I got to read about sex. I got to help people slow down and not feel so embarrassed about sex. And it was amazing to watch people come into the store and be all nervous and not make eye contact. And then [say], “How can I help you? Can I talk to you about lubes? Can I share about condoms and what kind of toys?” And then just watch them change. I fell in love with that feeling.

AUGUST: You decided to go into [sexuality work] more therapeutically. Did you have that same kind of connectedness and sense of purpose within counseling, too, right away?

JAMILA: That’s been more uphill. The sex educator world is a lot more like open and fluid and they’re kind of less constrained by, ‘We have to make this scientific and very like rigid.’ And I love being a clinician… I worked very hard to become a clinician and it’s great.

And, it tends to problematize things. Most sex therapists talk about sexual dysfunctions as opposed to sexual pleasure and enhancement. And we also don’t talk about culture. A lot of dysfunctions come because people have been shamed about their bodies, about how they should be responding. So I get into fights with other therapists about ‘your sex-negative stance that you is neutral is actually harmful.’ I’m going to stay in this field and push this. 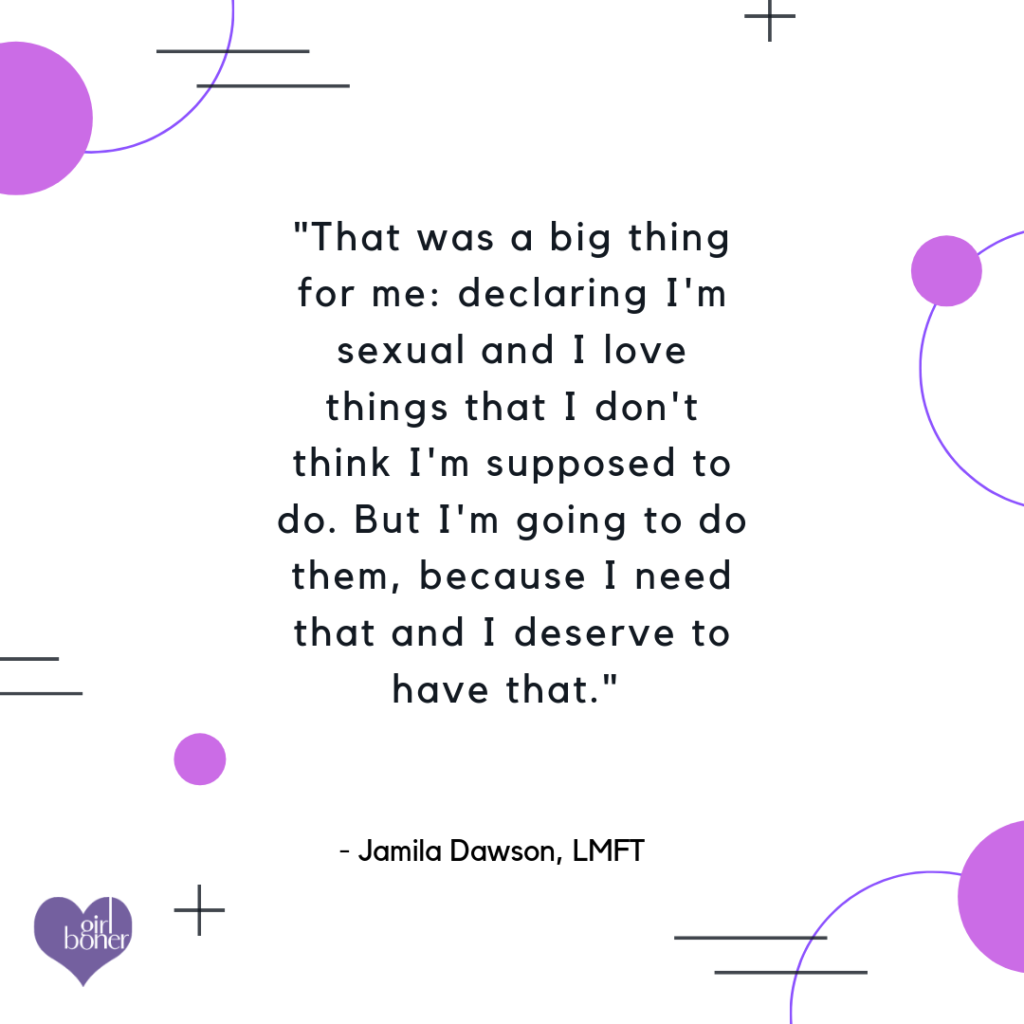 AUGUST: That’s such an important thing that you’re doing. It seems to have a sense of activism for you. Do you feel that?

AUGUST: The concept of pleasure and social liberation is important to you, too. Would you speak to what that means to you?

JAMILA: To go back to one of the early questions, on my own journey… I realized I had been trained to be so afraid of my body, so constrained about what I’m supposed to do, what I’m allowed to do, what a black woman should be into. And as I kept experimenting, with kink and other things, I was like, “There’s nothing to be afraid of. And look at all the energy people are focused on in trying to control, trying to deny, trying to restrain themselves and that’s not healthy.”

And what happens if we talk about pleasure as, “I want my own pleasure and I want you to be pleasured…” What if that’s our stance? I want people to feel safe. I want consent to be not just in the sexual realm, but in how we do our work, how we do our economics, how we do not doing incarceration, but how do we build community and connection and relationship that’s driven by pleasure? There’s a great book, Pleasure Activism, that everybody should be reading.

AUGUST: I can’t wait to read it… Because pleasure has this vibe about it of being frivolous, like “Oh, dessert!”

JAMILA: Frivolous, self-indulgent, like “Oh, you shouldn’t have too much of that.” But like what if that was our baseline? I don’t know about you, but after an orgasm, I feel so many things are possible. I feel more generous. I feel more open. I feel more creative. What if then we organized our lives from that place?

AUGUST: I’m so with you there. One of my favorite chapters in my Girl Boner book is on sex and privilege and it doesn’t get much buzz. I put it at the end on purpose, because I thought privilege discussions and talk about different kinds of repression are not what lead the masses to want to read a sex book, right? But it was really important for me to talk about… I think it’s really interesting to look at those different layers.

JAMILA: Yes. Our bodies give us access or access gets denied and it becomes liberatory to try to move through that. In the kink scene still, and definitely in swinger and even in polyamorous circles, there’s certain bodies that are allowed to be sexy… Thin cis white bodies are allowed to be sexy and there can be a struggle with that of people kind of like go after that.

And it can be like, “Oh, I guess I’m desired, so I have to do the thing.” And then for those of us who don’t have those bodies, it’s like, “Oh, sex isn’t allowed for you.” That was a big thing for me: declaring I’m sexual and I love things that I don’t think I’m supposed to do. But I’m going to do them, because I need that and I deserve to have that.

For much more, stream the episode on your favorite podcast app! Learn more about Jamila Dawson’s work here. 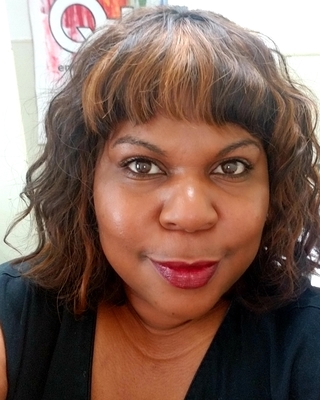