From early on, Yashi Brown’s dreams differed from those of her peers. Never dreaming of a wedding dress, the perfect gown or having kids, her aspirations were broader and, in many people’s perspectives at the time, not realistic as a career path.

“When people asked, ‘What do you want to do for a living?’ I said, ‘I want to do something great,” she told me during our Girl Boner Radio chat. “I want to change the way we think.'”

Yashi grew up in a loving Jehovah’s Witness family, with parents who were each other’s first everything: first real crush, first love, first significant other. As soon as they were able to date, they dated. As soon as they were able to marry, they wed. And while Yashi credits her religious upbringing for many of her personal strengths and she remains very spiritual, it didn’t necessarily prepare her well for some of life’s challenges.

Now an accomplished author, poet, speaker and active leader in the mental health community, Yashi is shifting the way people think. But getting to this point hasn’t been easy. In her late teens, she began experiencing symptoms that would later be linked to bipolar disorder 1. At the time, she was grappling with feelings involving a love interest.

“At 19 years old, I was so innocent, so this was very overwhelming for me,” she recalled. “There was a lot of confusion and shame around it, because he wasn’t part of the same faith that I was. I didn’t necessarily want to change this human being. That was scary for me.”

This arguable crisis of faith touched on her inner conflicts, serving a “catalyst to so much,” she said, contributing to a deep depression that would last for four years. Then at age 23, she began to lose touch with reality.

“I thought I could read people’s minds,” she said of her mindset then. “I thought individuals were following and tracking me, which is very common. I thought I had some holy, divine mission to take, and there were moments I thought I was just the shit. [laughs] Or when I thought I was all-powerful and could do so much… But that was simply in response to the intense sadness and feelings of worthlessness.”

Bouts of feeling invincible put Yashi at risk in multiple ways, as it does many people with disorders like bipolar 1. And all of this affected her sexuality.

“I think a lot of my depression had to do with being repressed,” Yashi said. “I was having strong sexual feelings and I wasn’t acting on them. I was literally self-destructing inside, and I think a lot of the sadness was stemming from that, then other things, of course, were triggering me… It wasn’t until the mania symptoms stepped in that the sexual parts became uncontrollable.”

This is all “pretty textbook” for people who’ve experienced mania, she added, and it can be very painful to experience. Medications for bipolar psychosis often have the opposite impact, removing not only sexual desires, but the ability to feel everything from sexual desire to sadness. Yashi described this as a “flattening.” Fortunately, she’s since found her way to treatment, including lifestyle measures such as meditation, that allow her to thrive. 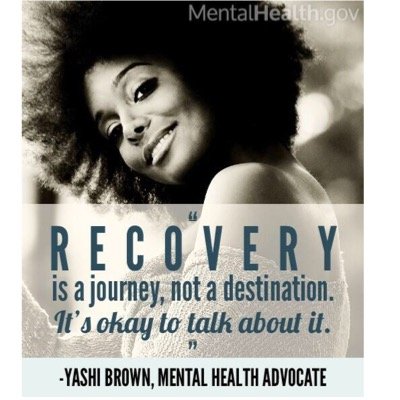 More than anything, Yashi hopes people who hear her story or experience her work gain the confidence to own their personal story.

“When you do that, you change whatever stigma is out there regarding depression, regarding self-image issues and body shame, regarding all of these different conditions that people just don’t understand or have an apathetic attitude towards,” she said. “When you own it, they’re able to see a human being instead of some sort of title or label. You’re constantly changing the conversation… You’re staying true to yourself and it’s so liberating to be open and honest.”

Learn more about Yashi Brown at yashibrown.com. (Turn up the volume to hear her read some of her gorgeous poetry!)