Home • Girl Boner • 4 Powerful Ways to be an Ace Ally

A common definition of asexuality is an ongoing lack of sexual attraction. Since connecting with Lauren Jankowski, a badass ace activist and writer, I’ve learned a ton about the sexual orientation—and don’t see a “lack” of anything at all. People who identify as asexual may not experience sexual attraction, but their lives can be just as full of love and wonder and possibility as anyone’s.

If you have any doubt, I hope you’ll listen to my interview with Lauren on iTunes or below, and read her phenomenal story in Embraceable. In the meantime, here are a few ways we can all be stronger allies to folks in the asexual community. Considering how little widespread understanding there is of the orientation, a deficiency which fuels and worsens discrimination, these steps are super important. 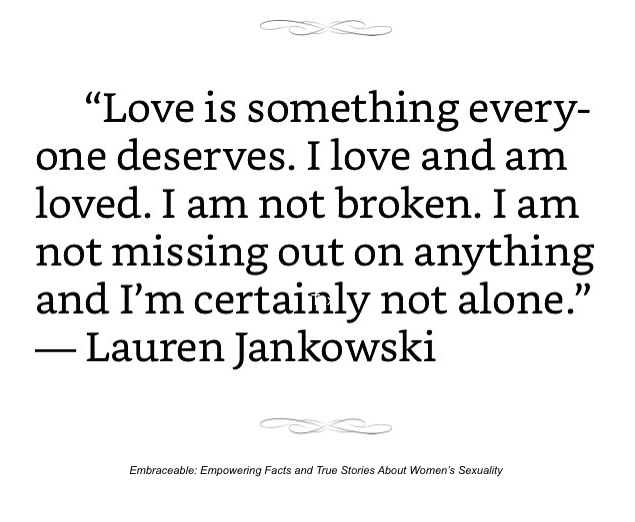 Asexuality is seldom discussed in sex ed, and many people still have little idea as to what it actually entails. Damaging myths about the orientation run rampant. If you want to better understand, yay you! But please don’t overburden your asexual friends with questions. If you’ve done your own research using quality sources and still have questions, reach out to fellow allies or ace folks who seem willing to help out. If you’re not sure if they’re game, respectfully ask if they are.

If someone shares with you that they are asexual, believe them, said Lauren. Don’t question their identity. “I’ve had a number of people say, ‘How do you know you’re asexual? I think you’re just afraid of your sexuality. I think you’re just afraid of sex,'” she said. Such comments invalidate the person’s identity and ability to understand themselves, while disrespecting an entire population. Lauren shared a great quote she spotted online: When I tell you I’m asexual, that’s a statement, not a debate.

3 – Listen and elevate their voices.

Being an ally means letting the people you wish to support speak, rather than derailing the conversation to make it about you, your beliefs or your experiences. It means listening and really hearing them, with the aim of learning and supporting. This requires an open mind and setting your ego aside. Don’t enter conversations about asexuality with ace folks with defensiveness or assumptions, but questions and willingness. When you feel tempted to do the opposite, take a breath and consciously decide to listen. When asexual friends, activists and public figures speak or write about asexuality, read, like and share.

Sexual orientation is important and beautiful, but it’s only one aspect of a person. We’re all more than our straightness, gayness, fluidity or asexuality. Lauren has noticed a trend, now that we’re seeing more asexual characters in films, books and TV. “There has to be the debate before the story continues on,” she said. “It is 2016… We can move past the ‘Does asexuality exist?’ question.” The same applies to real life. Don’t solely talk to asexual friends about asexuality, or say things like, “I love asexuals!” or “She’s my asexual friend.” Better options: “I love good people. She’s my friend.”

To learn more about Lauren’s journey and her incredible brainchild Asexual Artists, plus Dr. Megan‘s thoughtful response for a listener wondering if she’s asexual, listen to the latest on Girl Boner® Radio! Play the episode below or on iTunes here.

What steps have you taken to become a stronger ally to ace folks? Which step above most struck you? If you listened, what did you think of the episode? I love hearing from you.