Home • Body image • How to Forgive Yourself and Love Your Body

Shortly after giving my TEDx talk on healing from an eating disorder, a woman from the audience approached me and said, “I felt like I could have finished your sentences.” She, too, struggled to grappled with an eating disorder, worked hard to cultivate healing and has since committed to helping other teens and young women find their way out of similar dark places—while working as an actress with two films coming out this year.

I’m so grateful we met, because Helena Grace Donald is a force to be reckoned with, in the sun-shiniest of ways. You’ll see what I mean when you hear our Girl Boner® Radio interview!

Helena launched Girl Unfiltered to help teens lead happier, healthier lives. Her new book, Learning to Love the Girl in the Mirror, is a practical guide for minimizing self-criticism and trading damaging lifestyle habits for those that nourish your body and soul. She shared awesomeness on self-forgiveness, dancing around and loving your body rather than fighting it, the role tapping played in her recovery and more. 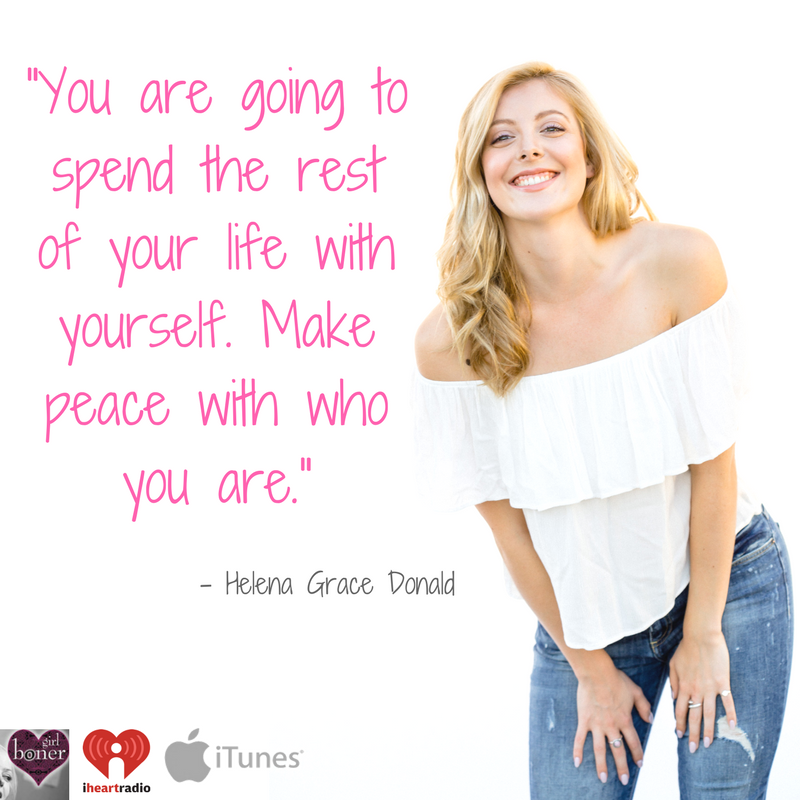 Find the full episode on iTunes, iHeartRadio or below! In the meantime, here are a few of my favorite highlights:

You know much of my story, but I don’t know the specifics of yours. Could you share a bit about your journey?

Absolutely… Throughout my teen years, I absolutely hated my body. I had such a negative relationship with it. Most of my teen years, I was on a diet and I was going from one diet to the next. I was always trying to find that hook that was finally going to give me the body I always wanted, because if I could have the body I wanted, then I could finally be happy. I knew that I wanted to be an actress and was told I could model because I was tall, and I thought those things would only be achievable if I had the body and a certain size.

I had a calendar I had made in which I’d actually covered the pictures with Victoria’s Secret models. I’d weigh myself every day and put the weight on the calendar. It was this never-ending horrible cycle of hating myself and not allowing myself to be the person I wanted to be because I was so trapped in this negative thinking. And that has a knock-on effect on so many areas of your life.

What helped you begin to turn things around?

One night I felt like my skin was crawling because I had this terrible urge to throw up. I had been bulimic for a while at this point, and nobody knew. But that night this screaming voice in my head said, “Don’t do it!” I wanted to get better so badly. I went to my mom in floods of tears. She’s a therapist, so she really helped walk me through taking that intense feeling down from a 100 to a manageable feeling. From that day on, I started to go into recovery.

Beautiful. What were some of the most powerful steps you took to heal?

I think a big part of it was forgiveness with myself, forgiveness with not being perfect. I talk about Little Miss Critical in the book. She’s a voice in our heads and she is trying to protect us, because she wants us to be happy. And she thinks we’ll only be happy when we reach a certain goal. I had to ask her to pack up her bags and leave, because I was going to start running the show.

There was a moment I realized I was either going to continue down Misery Street or make a change.  I sat in front of the mirror, and I owned up to all of the Little Miss Critical voices in my head. I said, “I’m sorry that I’ve been causing you so much pain. How could I have treated you so badly?” From the bottom of my heart I forgave myself… From that day forward I had to train myself to be my own best friend.

What advice do you give others on supporting someone struggling with disordered eating?

I tell people to look beyond and look deeper than the eating disorder, because there’s something that’s happening in her life, feelings she’s not able to process, and she’s only able to  deal with those feelings though the behaviors.

What about to those struggling themselves?

I also asked Girl Boner’s resident sex and relationships expert Dr. Megan Fleming to weigh in on forgiveness and loved what she had to say, including this:

It’s been said that holding onto anger is like drinking the poison and waiting for the other person to die. That’s true of all negative emotions. When we hold onto those feelings in our nervous system, we’re actually hurting ourselves. So this process of forgiveness is part of the healing process.

We’re all on this earth and our own journey. We take two steps forward, sometimes one back, sometimes three forward, two back. It’s a process. But we can stay committed to staying present and showing up with our best self. [Self-forgiveness] is about compassion. That intention helps us move forward and not only heal and broaden our relationship with ourselves, but with all of the relationships that we touch.

What steps do you take to love and accept your body? What did you think of the episode? We’d love to hear from you!