I was a healthy sixteen-year-old the first time someone told me to lose weight. With one sentence the renowned photographer affirmed my long-held fears that I was destined for fatness and flawed as I was.

So I did, gradually losing not only weight but my sense of self, until I nearly died of an eating disorder.

It would take years of hard, healing work to recognize that what I’d really feared was not mattering or measuring up—not by a scale’s standards, but the world’s.

In a culture where females are told in countless ways that we must appear certain unrealistic ways to be considered attractive or even valuable, every person who stands up for authenticity matters.

When I first learned of Neon Moon, an empowering lingerie company that features un-photoshopped images of models of varying shapes, sizes and races, I about burst out of my too-snug undies from excitement. (Yes, I got rid of those!)

Earlier this week, the company and its philosophies were under attack. A photo of one of their gorgeous models was nipped, tucked and shamed for all the world to see. Heartbreaking doesn’t seem a strong enough word.

In response to the bullying Neon Moon launched a campaign, asking women to post photos of themselves online, stating what they love about their bodies as they are and including the hashtag #moonbodylove.

That is how we better the world—by standing up in the face of adversity and shedding light on what counts.

I’ll share my entry but first, here is a “before” image. Before I’d learned to fully embrace myself. Before I realized my true passions. Before I grew from recovering emotionally from the ED to healed, past tense. Before I learned that “model perfect” is a complete failure of words, even when you’re being paid to present it.

I recall the makeup artist working hard to hide my tan lines with what seemed like tan paint better suited for fences. (Even with sunscreen, a partial tan prayed tell of my beloved, mind-clearing Miami beach jogs in shorts.) The stylist chose a suit that covered my appendectomy scar, which I’d adored since the surgery saved my life a few years prior. In effort to avoid the need for editing, we waited all day until the “golden hour,” when the sun begins to set and all the world glimmers sublime.

The photo is lovely in some ways. The scenery indeed shines, and I liked the suit that reminded my of my dad’s long career with UPS.

But it’s far from authentic. I never looked like this woman, even then. Where is my smile? My fervor for life? The scars and lines illustrating that which kept me whole? The image wasn’t photoshopped but I was caked in makeup, spritzed with glossy-something and performing as someone else versus living freely as me. And while I was no longer anorexic, I was still investing more time and energy in thinness than wellness back then.

What would happen if the world glorified women in more real, natural states (as Neon Moon does)? Would the young girls desperate for approval see hopes and dreams instead of diets and reasons for shame? I have to think so.

Here is my #moonbodylove entry, a photo taken a few months ago during my first ever cruise. Now in my mid-thirties, I feel lovelier than I ever did in my twenties or while modeling—not because of my looks, but because of my improved relationship with myself. That relationship has attracted more beauty of all kinds into my life. Everyone deserves that. 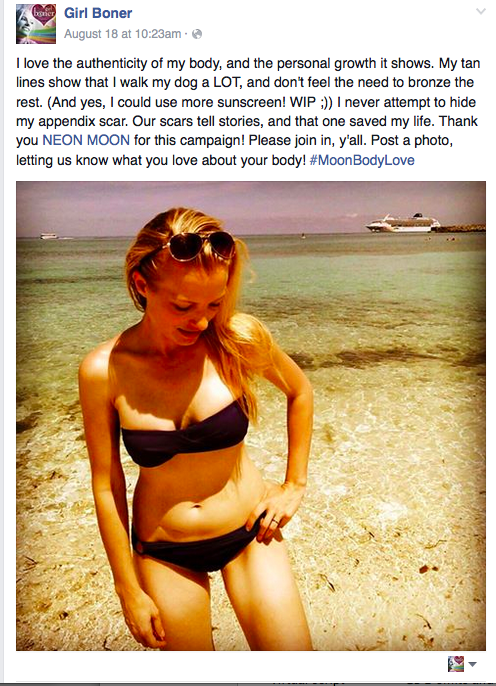 Whether you’ve learned to love your body yet or not, I hope you’ll join this campaign. I can almost promise that doing so will strengthen you while inspiring others, and let bullies who wish to keep women small (physically and emotionally) know who’s boss! We are, if we choose to be. United, we’re much stronger than on our own.