They can sound near miraculous. By drinking particular juices and avoiding food for several days or more, “cleansing” plans state, the digestive system rests and your body flushes out toxic substances, leading to improved weight control, energy, immune function and longevity. Many of the plans claim that taking various supplements, many of which contain stimulants or laxatives, take this process further. Any ill effects you feel meanwhile, from grogginess and stomach aches to anal leakage, are supposedly signs that your body is detoxing. On the contrary, they are signs of body harm and could very well lead to heightened toxicity. Research shows that so-called “colon cleanses” raise your risk for kidney failure, seizures, electrolyte imbalances and even death.

As some of you know, I recently turned down an article assignment on “cleansing your way to a bikini body” because creating damaging materials isn’t worth even the biggest of paychecks, IMO. This morning I caught a Good Morning America feature on “trendy cleanses for Kids.” (Yikes!) Thankfully, doctors and dietitians are speaking out against the trend, stating that not only are the plans ineffective, but risky—particularly for youth. I sincerely hope parents of these young cleansers are taking their messages to heart.

I’m sure many of the involved parents have good intentions, desiring greater health for their wee ones. And it’s tough to sort through the overabundance of conflicting information on diet and wellness, particularly when hundreds of billions of dollars go into convincing the masses that harmful and/or useless and unsubstantiated dietary tactics work wonders. Since the topic seems to be cropping up a great deal lately, I thought I’d put my nutritionist cap on and share a few facts worth recognizing if you or your loved ones are considering a cleanse.

♦ Modern detox diets and cleansing plans derive from the Master Cleanse—a plan created by a man with no relevant credentials or dietary expertise who was later convicted of medical fraud. Anyone who know the ins and outs of digestive function and physiology will tell you that the plans are based on hype, not science. (And nutrition is a science.) There’s not a shred of proof or medical text that upholds the legitimacy of cleansing.

♦ The body cleanses itself, but it won’t if you don’t feed it.  Sure, you might feel rejuvenated by drinking only particular fluids because you feel as though you’re creating a fresh slate and because starvation can cause a release of endorphins (out of panic), but your organs won’t release toxins in the process. That’s just not how food or the body work. When you eat a balanced diet sufficient in calories and nutrients (which isn’t hard to do!), your kidneys, liver and even your skin flush out toxins. If you fail to eat enough, on the other hand, organ function reduces, leading to more toxicity, not less.

♦ They don’t promote fat loss. Weight lost from juice fasts and cleansing derives from water loss and/or diarrhea. The pounds will not only return once you start eating but lead to even more gain later on, because consuming too few calories slows the metabolism down. A balanced diet based on nutritious food, regular physical activity and emotional self-care may not provide rapid results, but they are safe, proven steps to lasting weight control. Besides, eating is fun! At least, it should be.

♦ They can have scary long-term effects. Fasting on water or juice can not only lead to nutrient deficiencies, poor brain function, fatigue, dizziness and other symptoms straight away, but hinder a child’s development. She’s more likely to develop osteoporosis, metabolic problems and obesity later on (which are risks of all restrictive diets), but develop severe psychological complications, such as poor body image, depression and eating disorders. To learn ways to cultivate healthy body image in your kids, check out 50 Ways to Lose the 3-Ds via the National Eating Disorders Association.

How about we all eat food?

Food is awesome! I’m namely talking about whole foods our bodies are designed to eat, such as whole grains, fruits, vegetables, nuts and seeds, though less-healthy fare is perfectly fine in moderation. If you really want to cleanse, eat only whole foods for awhile. Stay moderately active, well-rested and hydrated. Aim to eat mindfully, slowly and with awareness. Rather than avoid food, rid your life of toxic influences—people in your life who make you feel inadequate, the job you hate, diet trends intended to fatten makers’ wallets while your health suffers. Increase the good in your life, and fitness of all kinds will follow. I truly believe that. 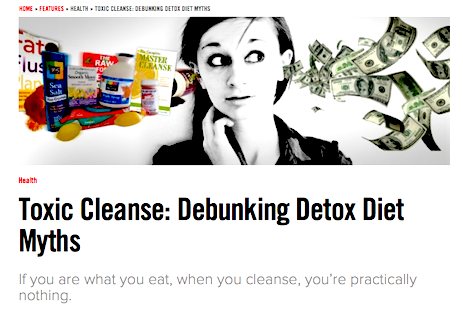 That’s my two-cents! How do you feel about cleansing? Do you think children, or anyone, should cleanse? Any questions for me while I still have my nutritionist cap secured? I love hearing from you!