Did you know that clitoral orgasms were once considered bad? I know! “Bad orgasm” seems like world’s biggest oxymoron to me…

It seems crazy, but at one point clitoral orgasms were largely considered “bad” and inferior to vaginal orgasms. Virginia Johnson, one of the individuals who helped debunk that myth, passed away last week. She was one of the first scientists to study sexuality in a time when few women were recognized as scientists, much less sexual revolutionaries. Her story will be featured along with that of her longtime partner, William Masters, in the Showtime series Masters of Sex this fall.

I had the opportunity to write about Johnson’s legacy on behalf of DAME Magazine, and thought I’d pay tribute to one her most significant findings here today—basically the notion that clitoral orgasms aren’t only natural and common, but potentially wondrous. (Wahoo!) To learn more about Johnson, you can read my article, The Contributions and Controversy of Sexual Science Pioneer, Virginia Johnson. 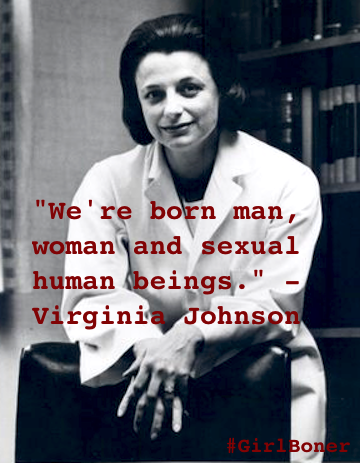 What are clitoral orgasms?

In short, a clitoral orgasm is a scrumptious pleasure explosion that happens when the clitoris, aka the “clit” or “pleasure button,” is sexually stimulated to the point of climax. It can happen with or without a penis, finger, sex toy or—er…other object?—inside the vagina.

Are they less awesome than vaginal orgasms?

Back in 1905, Sigmund Freud told the world that a woman only fully orgasms when her vaginal insides are stimulated by a penis. (He didn’t base this theory on science, it’s important to note, but on his belief that women are inferior to men.) We’ve since learned differently, much thanks to Masters and Johnson.  Their research, considered groundbreaking in the 1960s, showed that all orgasms are created equal as far as physiological effects go, and that most women orgasm through clitoral stimulation—with or without anything or anyone entering her vagi-verse.

What about G-spot orgasms? Aren’t they way better?

Great question! But no. These bad girls take place inside the vagina and are considered the most powerful sensation-wise. But that doesn’t make them superior to other orgasm types. We get the same euphoria, release and intimacy benefits from all orgasms—and all types vary in intensity. Many women who have G-spot orgasms find that they are ultra-strong when the clit is also stimulated. (Some folks call this combo the blended orgasm.)

The tip of the clitoris looks like a small button, thus the nickname, but there’s a lot more than meets the eye. The clitoris is actually an organ system surrounding the vagina, urethra and anus. So rather than think of an orgasm as “vaginal” or “clitoral,” Columbia University Health Center recommends considering the feelings that come along with them. Orgasms are orgasms! (Just…say…YES!!!)

How can I experience clitoral orgasms?

Your clit can also be stimulated by your partner’s pelvic bone during intercourse, while all kinds of other fun things are happening. It’s easiest for most women to reach clitoral climax if she’s on top, but other positions can work well with the right, you know, MOVES. Fingers, yours or your partner’s, can also pave the way to clitoral orgasm; simply touch or rub your clit during sexual play.

Always! Often when people are wondering how to have particular types of orgasm or how to orgasm at all, underlying factors could use addressing. Remember, the brain is the biggest sex organ—so overall wellness and attitude play tremendous roles in sexual satisfaction.

If we desire fabulous sex lives, it’s best we take care of ourselves. In Girl Boner land, this means nurturing our bodies, inside and out. Eat a balanced diet, based on nutritious foods (but without risky diet-style restriction), and aim for sufficient nightly sleep. Pursue work and hobbies that fulfill you emotionally and steer clear of toxic people—anyone who doesn’t love or respect you for who you are.

Speaking of which, body image plays a tremendous role in our sexuality. If your sex life and ability to smile at your reflection seem lacking, make efforts to reduce negative self-talk and embrace your body as it is. We’re only blessed with one body; shunning or hating it doesn’t help anything. The benefits of body embracement, on the other hand, are endless.

If you find yourself criticizing yourself or worrying during sex, Columbia University suggests using your imagination, relaxing and concentrating on sensations—what feels, tastes and smells good—as useful ways to experience pleasure and orgasm. Fantasizing during sex can actually stimulate the brain area that sets orgasm off, so dream away!

And remember, orgasms, like many areas of sexuality, are highly individual. Experiment, communicate with your partner and do what helps you both feel most connected and alive. Experimenting on your own, also groovy!

Have you ever wondered about the difference between orgasm types? Did anything in this post surprise you? Any tips or questions to add to the mix? Think you’ll watch The Masters? I love hearing you, and welcome all respectful thoughts! ♥