“The truth will set you free, but first it will piss you off.” — Gloria Steinem

For Mike Sirota and his readers, that’s a very good thing.

Mike is one of my favorite people, and not merely because he edited In Her Shadow and was wearing a Beatles shirt when I met him (although obviously—perks!). He’s as kind as his tales are terrifying and seems to enjoy writing and helping fellow writers equally—both of which say a lot.

I’m reading his brand new release, Freedom’s Hand, now and have to say—it’s AWESOME. If you enjoy character-driven, suspenseful, heart-wrenching stories (and who doesn’t?!?), I highly recommend that you zip over to Amazon and nab a copy. Read on for more of the ins and outs of his wonderful story and why it came into fruition. 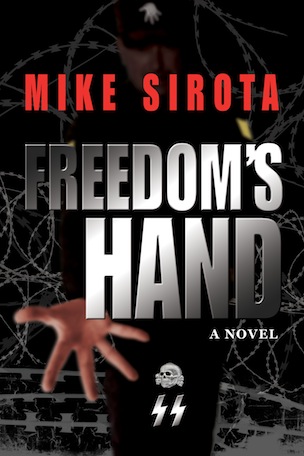 As a teenager, Nathan Adler barely survived the horrors of the Auschwitz death camp at the hands of the Nazis. Fifty years later he could not have imagined that he would live the nightmare again. This time, however, the concentration camp is not in Poland. Erected by Freedom’s Hand, it exists as a citadel of suffering and death—in the desert of the American Southwest.

Mike Sirota on Writing, Indie Publishing and His Latest Release

AM: You set this story aside for quite some time before moving forward with publishing. Why now?

MS: Actually, I’ve made a few half-hearted attempts at marketing Freedom’s Hand in its nearly three decades of existence. Let me go back to its beginnings to say that, initially, I never planned on completing the manuscript until a publisher had made an offer. My then-agent convinced me that Simon & Schuster would take it on, but I needed to finish it. So I did—and they didn’t. Too controversial, or something like that. Imagine that—ME controversial! Afterward, I just left it “in the drawer” and went on to the more fun things that I enjoyed writing—until my long estrangement from the writing game.

But last year I pulled it out of the drawer and re-read it, as I did with a few other unpublished projects. Aside from some easily reparable crappy writing, I found it a powerful story, and I recalled how much emotion I’d put into it so long ago. I also realized, sadly, that it remained relevant even today. Hatred and intolerance always seem to be in vogue. People are tortured and killed by the hundreds, the thousands, and more in the name of twisted ideologies. For me, this makes Freedom’s Hand somewhat of a statement.

AM: Amen to that. Any advice for writers who are grappling with similar issues—wondering when to set a story aside versus self-publish it or seek representation?

MS: I don’t think that my experience with Freedom’s Hand and what you’re asking is an “apples-and-apples” thing. If I were a new writer and had a finished manuscript, I would want to see it published as soon as possible. But in my experience, most novices cannot be objective enough to judge if their project is ready, or as I call it—professional grade. They’ll need at least one other set of eyes for that, and I don’t mean their spouse or sister-in-law. A professional evaluation by a writing coach or editor will help that writer determine if the project is READY. While that could be costly, it will definitely speed up the process.

AM: As you know, I LOVE thrillers that address social issues. Yours does so beautifully. Why are its central issues so important to you? What compelled you to write about them?

MS: My parents were Eastern European Jews who immigrated here in the early twentieth century. I was raised in a predominantly Jewish, lower middle class neighborhood in The Bronx, post-WWII. Many of our neighbors were Holocaust survivors, though I didn’t know this, or understand why they had numbers on their arms, for a long time, because no one would talk about it. When I finally did learn about it—and discovered that some of our own family members had perished in the camps—I was enraged. That anger stayed with me for a long time and proved the catalyst for Freedom’s Hand. (Readers might be interested in a story that I wrote about my childhood experience, titled, The Number People.)

AM: That’s horribly sad, and one reason I think stories like Freedom’s Hand are so important. You’re skilled at making the reader empathize with and fight for the protagonists, in Freedom’s Hand included. How do you approach character development?

MS: My characters are reflective of most human beings: flawed. We’re just ordinary folks trying to get by in a challenging world, hoping to love and be loved. But sometimes, ordinary people are thrust into extraordinary situations—especially in fiction—and it is how they handle these necessary changes that, I believe, appeals to readers. In Freedom’s Hand we have David Lowe, a nerdy schoolteacher from suburban Chicago, suddenly pitted against a host of murdering, racist thugs in order to save his family. In Demon Shadows, successful novelist Paul Fleming has writer’s block because he misses his kids after a contentious divorce. This doesn’t exactly prepare him for the horrors he will soon encounter at an isolated writers’ colony, but somehow he’ll need to rise to the occasion. Bottom line: readers understand my characters because they see some of themselves in them, and they’ll be rooting for them to overcome whatever challenges I choose to throw in their path.

AM: You can have dinner anywhere in the world with any two authors—living or dead (but rejuvenated!). Who would you choose? What and where would you dine?

MS: The first one, easy: Edgar Rice Burroughs. He is my all-time favorite writer, and my muse. Without him I would never have begun writing. I can think of so many for a second choice, but let’s go with Mark Twain. I think that would be a hoot! His quotes are priceless and often make my day. I would invite them for seafood at one of my two favorite places: the Fish Market in Del Mar or Monterey Bay Canners on Oceanside Harbor.

AM: Awesome! I’m coming. Seems as though you’ve been published by just about everyone over the years. What do you love most about being an indie author?

MS: Being in control of everything regarding your books. Not having to rely on the whims of a publisher to promote—or not promote—you, or not even matching your own efforts for the small percentage you’ll earn in royalties. Yes, it can be great to have a BNYP (Big New York Publisher), and once in a while even a newbie can become a mega-author.

But so much of that potential success may rely on things over which a writer has no control. Let me share one of my own BNYP stories. I landed Bantam Books for my novel, Demon Shadows, and thought I was on my way. I had a champion there, an executive editor who loved my work. She contracted me for a second book, The Well. Demon Shadows started out fine, about 25,000 copies sold per the initial royalty statement. The Well was about to be published. Then, my editor left Bantam. Losing your champion can be death to a writer. The Well was published but put Out of Print less than two months later. It never had a chance. I never received a royalty statement for it, or any other for Demon Shadows. And people wonder why I got out of the game back then?

AM: What’s next in the pipeline for you?

MS: A historical novel, a real labor of love that has spanned over three decades and is just about ready. It’s a Native American story—what else? Though fictionalized, it is a remarkable true story that deserves to be known by far more people that are presently aware of it. Enough said. 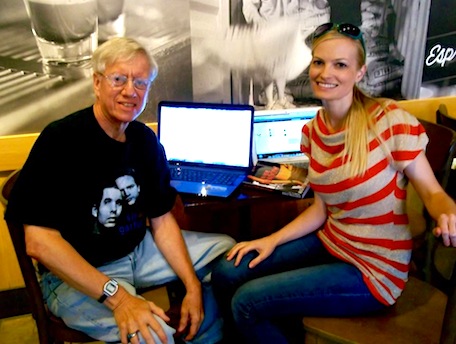 Thanks, Mike!  Now it’s y’all’s turn. Have any thoughts or questions to share with this fabulous writer? (He’s also a writing coach and has about 20 zillion additional titles out; he’s a mega resource!) Who would you invite to your author date? What would you eat?