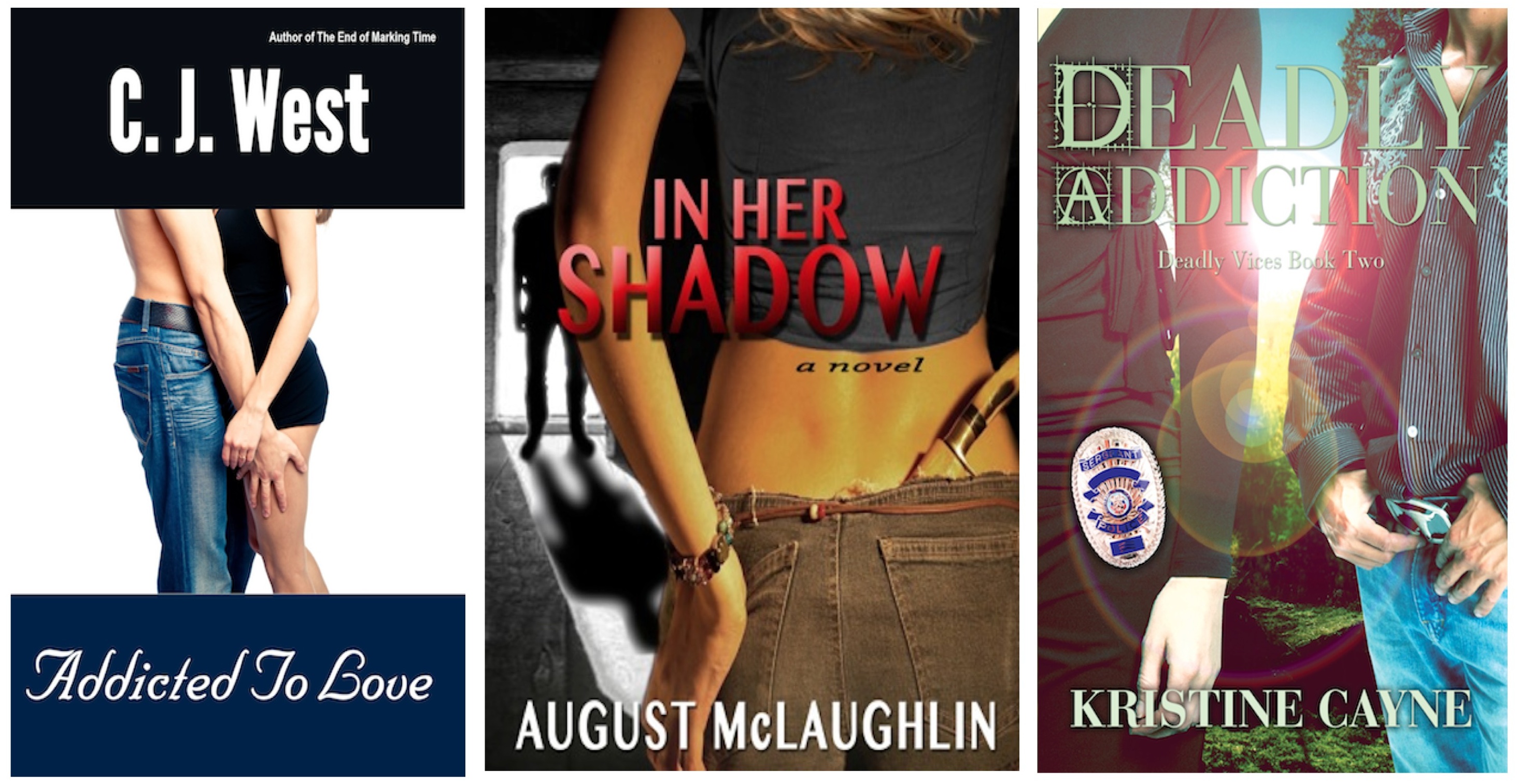 Addicted to Love, by CJ West:

Wes Holiday sells his landscaping business and retreats to a quaint mountain town to heal after ending a ten year relationship with a woman he couldn’t bring himself to marry. In three weeks he is so captivated by a hair stylist that he deprives himself of food and sleep to be near her. When the local sheriff is murdered, Wes is recruited to keep the peace in the town his parents built, but he knows nothing about law enforcement and he’s struggling to understand how a woman he just met can dominate his every waking thought. Soon the idyllic town with a penchant for romance is rocked by a bizarre series of murders that defy explanation and it is up to Wes to stop a raging epidemic of violence. Purchase via Amazon

When beautiful police sergeant Alyssa Morgan enters his life, Rémi Whitedeer never expects her to upend it. Not only does she have his hormones in an uproar, she’s also threatening to take the position he wants–Chief of Police for the Iroquois Blackriver Reservation. But Alyssa is more than a Barbie cop. Her ends-justifies-the-means philosophy, so different from his own, challenges Rémi on every level. With her sharp investigative skills and her fearlessness, she leads Rémi to confront bitter truths about his family and his standing as a man of mixed race within his tribe.

Tall hunky Rémi Whitedeer, of the panty-melting grin and the smoldering green eyes, flips Alyssa’s world ass over teakettle. She’s always had a laser-like focus on the job, but Rémi proves a constant distraction. His inner strength and sense of purpose strip away the winner-take-all attitude Alyssa wears like armor. Soon she’s longing for more–a more that terrifies and intrigues her. If he finds out the fine line she’d walked while undercover, will he still want her? And will she ever find the courage to let him–or anyone–that far in?

When Alyssa and Rémi uncover a drug-fueled scheme involving a biker gang from Alyssa’s past and a militant sovereigntist group led by Rémi’s cousin, they are forced to choose between their growing love for each other and the lives they’ve worked so hard to build. Will Rémi and Alyssa have to leave everything behind–even their identities–for the chance of a future together? Purchase via Amazon

In Her Shadow, by August McLaughlin:

One woman locked in a basement, nearing death and longing for escape. Another baffled by the inexplicable symptoms wreaking havoc on her life. Both are lost and alone, yet somehow connected. And time is running out…

Near the tenth anniversary of her parents’ unexpected death, Claire Fiksen, a lovely young Harvard-grad and gifted psychologist in Minnesota, develops bizarre symptoms of an eating disorder that threaten her fledgling career, her relationship with a handsome young medical student, her grasp on reality and, soon, her life.

When her beloved grandfather reveals that there may be more to her parents’ death than she’s realized, Claire’s pursuit of healing becomes a desperate search for answers as she delves into her family’s sordid past. Meanwhile, someone is watching her every move, plotting to draw her into her own twisted web of misery. Claire has something he needs, and he’ll stop at nothing to obtain it. Every step Claire takes brings her closer to the truth and danger. And her life, she discovers, isn’t the only one at stake. Purchase via Amazon