Have you ever wondered if you orgasm “weird?” Folks ask me about that pretty often. The truth is, there are many ways of experiencing orgasm and all of those Os are valid. I loved exploring three first Big O stories and 10 types of orgasms for this week’s Girl Boner Radio episode!

Listen on Apple Podcasts, iHeartRadio, Spotify or below! Or keep reading for a lightly edited excerpt from the transcript.

Lynn Anderton, a single woman living in the UK, told me she hadn’t really thought much about orgasms when she experienced her first one. She only knew that they existed.

It was somebody of my same age who I was dating. He was more experienced than me. And it was in my parents/ house. They’d gone out for the day. It was like heavy petting really. Obviously I didn’t realize what was kind of going on for myself… It was done with his fingers. He was obviously hitting my G-spot, so that’s what was making the orgasm quite exciting. The pleasure of it had led me to that, but I just wish I’d known my body more.

Then there’s sexologist and author, Dr. Lanae St. John’s first orgasm story. She shared it with me in a chat we recorded in my kitchen that I released in September, 2019. She had just told me she never had a sex ed class, just a “puberty education” class, which involved cartoon videos about periods that she said looked very 1950s.

I actually remember the first time I had an orgasm… I was seven or eight years old. We were at a park and I had set up this little circuit for myself: run around the park, go up the slide, slide down the slide, swing, and then jump off the swing..run around the merry go round, do all these little tricks or do these little tasks. And the last thing was to climb up a pole and ring a bell. And so all of that tension and excitement and energy of running around and doing all these things…I had an orgasm: Oh, my God, what just happened? And I remember asking if we could go back to that park.

I mean, wouldn’t you? Lanae’s been on a mission to better inform others about sex and sexuality for years now. If you have kids, I highly recommend her book, Read Me: A Parental Primer for “THE TALK.”

Jayne Renault, who described herself as a “smut queen by day; alley-wandering photographer of Montreal’s trash by night,” told me she was 10 or 11 when she experienced her first orgasm. And she said it was “definitely an accidental discovery.”

We had this electric back massager at the house growing up and used it for actual massage purposes. And just very methodically and medically feeling how it felt on like my fingertips and on the tip of my nose and just going through everywhere, and then eventually making its way to more erogenous zones and going, oh, that’s interesting.

And so I can’t necessarily pinpoint that first orgasm, because it was just this slow, organic, methodical exploration of my entire body. And I remember definitely, there were points where I was getting to that point of approaching orgasm and being overwhelmed by it and stopping and being like, Well, that was just a lot. I need a break. But then it got to a point where it’s like, I’m not done yet. And then I guess I was experiencing orgasm as a result, but I wouldn’t know until years later that that was what was going on.

I didn’t feel guilty about doing it, but I knew that it was something that was just for me because even though we didn’t talk much about sex growing up, there wasn’t a lot of shame around it either. There was never any sexualizing of body parts. We use the actual anatomical terms like penis and vulva and vagina and stuff. I knew it was for me, but I didn’t feel any guilt around it. So I was able to really explore in my own time.

In some ways, Jayne said, her relationship to orgasm hasn’t changed a whole lot over the years. She’s evolved and grown in her sexuality and as a person, of course, but that sense of orgasms being her own private joy has remained.

With partnered experiences, that’s a bonus, but still at the end of the day it’s mine. And I have to kind of go inside myself in order to experience it. So for a long time, of course, there’s that like, Oh, well, what’s wrong with me? Why can’t I get off with somebody else, or whatever. But I guess I got over that and realized that no, this is my experience and so I can share it with someone if I feel comfortable, but it doesn’t have to be the case every time.

Everyone just wants to know that the things that excite them or turn them on isn’t weird or shameful. But that’s kind of part of the exploration, too… Why do you feel shame about this? Why does it turn you on to explore? And none of that is weird. Everything is okay and when it comes right down to your orgasm. That’s all yours, too, and however you come about it, as long as there’s no consent being crossed, it’s okay. And exploring that and exercising that will get you closer to like owning the pleasure that you deserve.

I so often hear from people who wonder if they are orgasming “weird.” That’s one reason I decided to include a section on seven types of orgasm in my Girl Boner book. Today, in honor of anyone who wonders about their own orgasmic traits, I’m going to read much of that section with this important note: every one of them is normal… 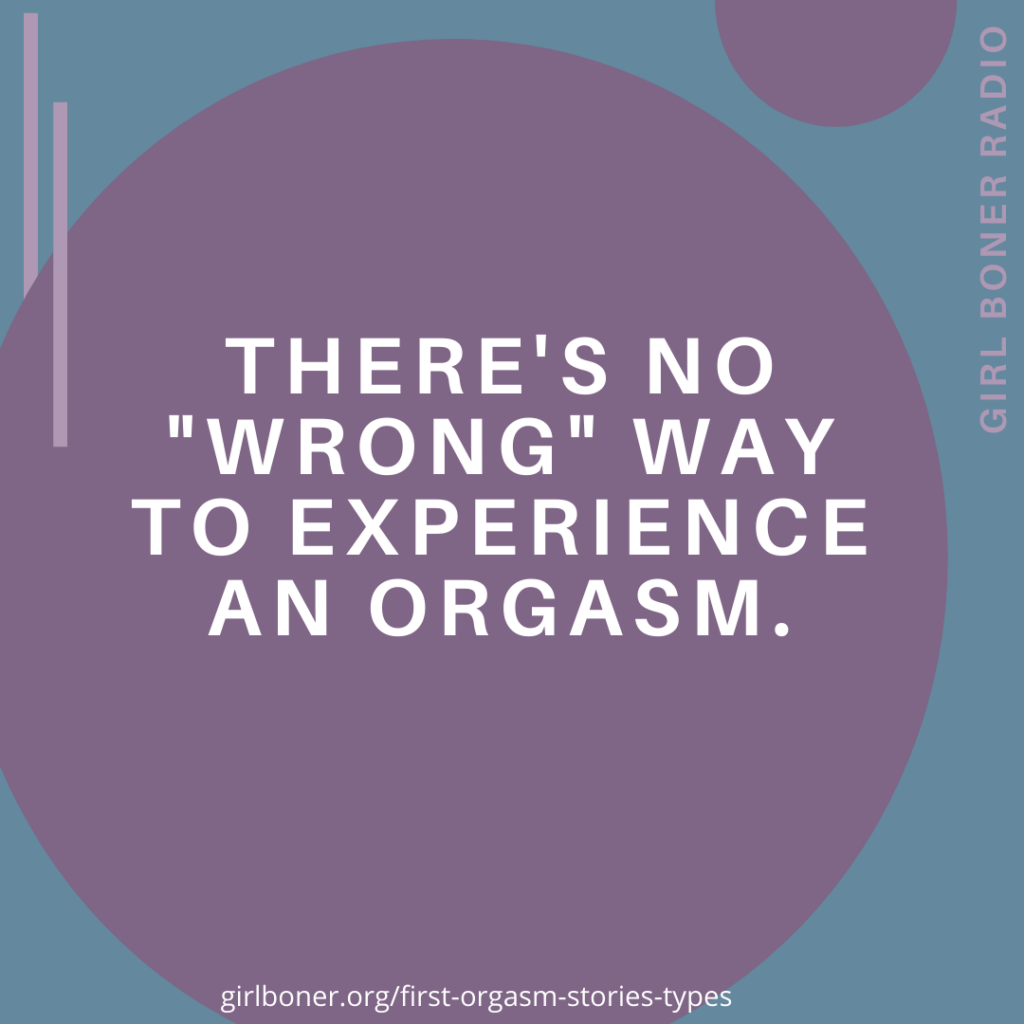 To learn about 10 orgasm types, stream the full episode up above or on your favorite podcast app! Here’s a sneak peek at Os I explored:

Big thanks to everyone who’s joined me on Patreon! If you’d like to join us or learn more, head to patreon.com/girlboner.