I’m sure I’m not the only woman in the U.S. today whose mother or grandmother couldn’t date without a chaperone or was expected to date-to-marry only—preferably before the ripe old age of 25. I’m sure I’m also not alone in my gratitude for the freedom many of us now have now, to date or not date, marry or not marry, have casual sex or not, and stay partnered, hitched or single indefinitely.

Seriously, choices are a groovy thing.

Thanks to Garren James, today’s women with the financial resources also have the option of hiring a male escort to tickle their, ahem, fancy—whatever that may be. The founder of Cowboys 4 Angels, the elite straight male escort company geared toward women, featured on the hit Showtime series, Gigolos, joined me for a chat last week.

Whether you’re enticed by the idea of hiring an escort or simply want to learn more about this spicy business, I think you’ll really dig what he had to say. He has pioneered this industry, cultivating a business that benefits continually more women with a range of needs, hopes and desires, all while implementing the deep level of care and respect they deserve. 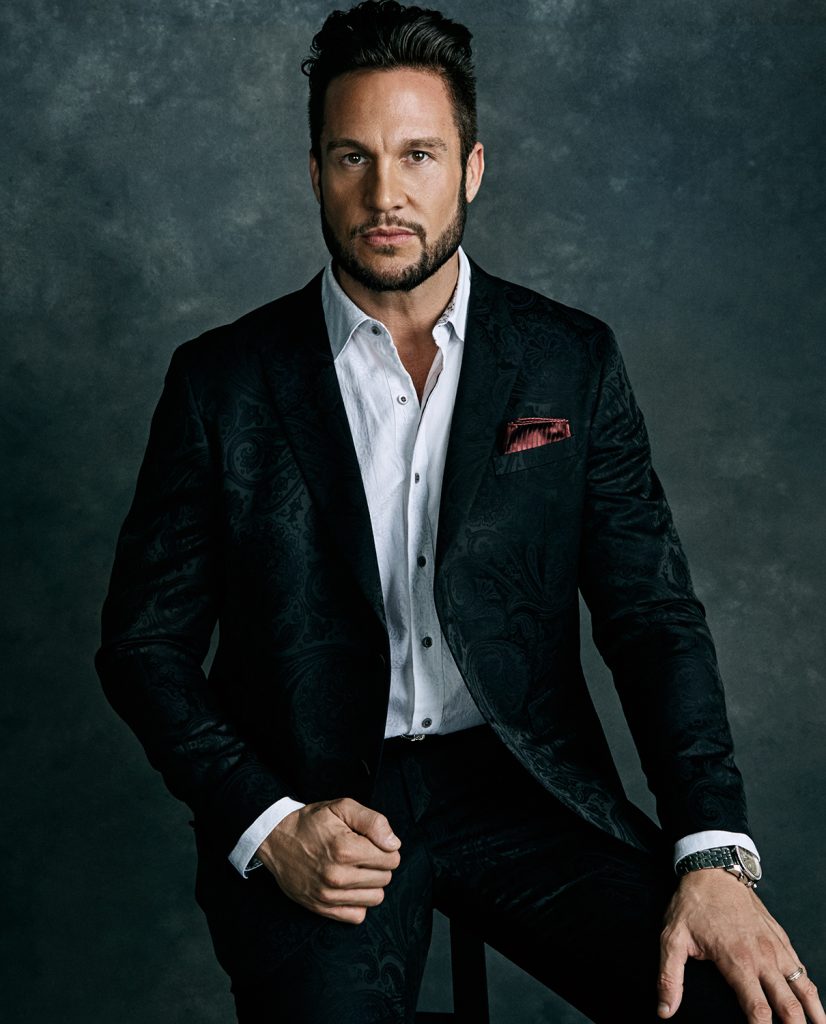 Why did you start Cowboys 4 Angels?

I started it because I had a girlfriend who ran an escort company. There seemed to be no option for a woman to hire a man, which didn’t seem right. So I created this exclusively for women to hire men. It was kind of shocking to people at first. We mostly received prank calls— like, “you’re not real.”

The day we were on the Tyra Banks show, we ended up being among the top [web] searches in the nation. Then we knew women actually were really like interested in this, they just didn’t think it was possible.

My days consist of client conversations. The phone goes on at noon and it goes off at 1am, and it’s seven days a week. I am in constant contact with all of the men and all of the clients, so thank God for the invention of texting, because it makes my job a lot easier. We do a lot of business via texting, with repeat clients.

Another kind of unique thing with the agency is that I do not give the men clients’ last names, phone number or email. So it’s extremely private. When a guy arrives that evening, I’ll alert the client via text and help him find her. Then after the appointment, the clients do not go on an email list, they do not go on a call list. My policy is, if you had fun and want to use our service again, just call us back. We won’t bother or harass you in any way.

How many calls and messages do you get in one day?

I remember one month looking at my text report and it was around 7000 texts. It really depends on the day. On really slow days, we might get three or four appointment requests from new clients, along with random text messages from clients, about changing hotel locations or updates about dress codes for an event. There isn’t a day that goes by when I’m not chatting with at least four or five men, and five to ten clients. And I generally get 10 employment requests a day,

What do you look for in a new hire?

One of the most important things that people don’t realize is having professional photos. That’s a make or break. We don’t put up selfies of a guy in the mirror. They also have to be good-looking enough, meaning they have to have some sort of presence.

I have interviewed so many good-looking guys who were just not cut out for the job. When they start talking about women hitting on them, or women they’ve “taken down,” I sense a big ego. That person is just not going to be good at this job, because this is more of a selfless act. It’s all about somebody else’s evening.

Can anyone apply to have their spicy fantasies come true on Gigolos? Asking for a friend!

Yes, there’s actually an email list option on the desktop version of our website. We have an email we send out that says, “Hi, do you want to be on the Gigolos show? Tell us what your fantasy date is.” We pick through the replies, then send some on to the producers. We also have a Cowboys 4 Angels Facebook page, and we’ll drop an alert there.

I hear that vacation dates are in high demand. How do those work?

We have so many women who want to travel. They’re extremely busy with their job, and don’t have time to date. They want to go on a cruise just to get away, but they don’t have anyone to go with, so they call us.

A woman might book a four-hour appointment and say, “This guy was the best. I want to fly him to Dallas where I live.” Some are longer trips. I have a guy right now who’s on a two-week trip. Another gentlemen just went on a 14-day trip to Turkey. Another’s going to France, and a cruise in between.

Our rates are discounted for the more time booked, and we don’t make money on flights. The client pays for the flight, and we book the cheapest possible direct flight.

So the escort basically serves as her boyfriend throughout the trip. Who plans the activities?

So I have to turn the tables and remind them. I’ll say, “I know that you’re used to a man asking you out and making all the decisions and telling you what he wants to do, or maybe your self-esteem isn’t up to par with deciding what it is you want to do. Please pick what you’d like to see and do. Don’t ask what he wants to have for dinner. What is your favorite food to eat?”

I’ll email them a list of things to do in Vegas. It’s countless, and ask, “Do you want a helicopter ride to the Grand Canyon? To go on a  dune buggy trip? A helicopter ride over the strip to see all the lights? A walking trip to see all of the properties?They’re there to accompany you, and to enjoy their time with you. But please plan what you want to do.” Sometimes it’s tough, trying to convince them to do it.

What about physical intimacy? Is anything prearranged?

It’s a crime for me to guarantee sexual services for clients. If someone expresses that they want to purchase some sort of sexual service, that’s not something I’m able to schedule. I have to end that conversation. All we can guarantee is the man’s time and companionship. If something romantic should happen, that’s personal preference and personal choice.

I honestly don’t think when women call that their main goal is sex. I think they want to feel special, to feel attention, to feel good about themselves, to have somebody fun to spend time with, to put a smile on their face.

I always tell the guys to give genuine compliments throughout the evening. Hold their hand. Make them feel special. Open doors for them. Don’t use your phone during dinner. Do things many guys aren’t doing on dates nowadays.

Is that where the name comes from, Cowboys 4 Angels? It has a chivalrous vibe to it.

Not immediately. I just thought it was catchy, but now it’s become a symbol. The client is an angel. She’s to be treated like an angel for the evening, made to feel special.

Some of my favorite episodes of Gigolos feature clients working to empower or feel better about themselves. Is that common?

We have so many clients with special needs. We see clients who are going through a horrible divorce. They’re in such a big battle that they can’t start a new relationship, so they’re using us as a getaway—a night to forget, to have special attention where they can let their guard down and feel special without feeling concern about the old relationship, or a new relationship.

We have many women who have lost a husband, and had the same husband for 20 years and they’re in shell-shock. We see women with body image issues, self-esteem issues, women who are not able to have a relationship because of substance abuse issues. We’ve had women who’ve been raped and feel they can never trust a man again—and sort of use us to help get that trust back.

I don’t want to make it all about that, because it’s not. The other 50%  are conventionally beautiful, wealthy women that are just tired of the dating scene, and this is easy. Or they want to go to clubs with a girlfriend without being swarmed by guys, so they hire a couple of guys—“These girls are unavailable” type scenarios.

The ones that involve healing from trauma seem intense. Do they require any special preparation or training?

I don’t want to make it seem like we’re an alternative to therapy, but we are something that can be combined with therapy. I’ve actually had women call who told me their therapist suggested they call Cowboys 4 Angels.

I always tell the women upfront, we’re not therapists or psychiatrists. Hopefully in your life, you’re getting that sort of help. Please look at this night as just having some fun, letting loose with a guy who’s safe and secure. That’s our job description.

We don’t claim to be anything more than that, but yes, if anybody is going through a trauma situation, I will call the gentleman and let him know so he’s aware and not overly aggressive. They’ll be more laid back, let the night evolve. Some women really like more aggressive guy, and that’s why we have Nick Hawk.

Ha, yes. Nick is awesome. I loved interviewing him on Girl Boner, and sensed some midwestern kindness I hadn’t seen much of on the show.

He’s one of a kind. The show kind of evolved him into being this “bad boy” sort of guy, but he’s one of the nicest guys I know. He has more sort special needs clients and clients with physical disabilities than just about anyone else.

Are you allowed to discuss fees at all?

It’s really simple. Most of the men have different rates, but there’s an orange button on everybody’s profile that says “view his rates.” Our appointments generally start out at two hours for $550, then go up from there. Guys on the show are more expensive, but just because a guy’s rate is more, doesn’t necessarily that he’s the best match for you. It just might mean that he’s been with the agency longer and his time is more limited.

What has surprised you about women throughout your work?

One surprising thing was the length of the appointments. I put longer options out there on a whim—and thank God we did. Female escort agencies tend to give you an hour. Most of our appointments are four-hour minimum. Our clients want somebody to go to dinner with, meet at a bar and get drinks, possibly go upstairs, possibly spend a weekend together. Women are booking longer and longer appointments compared to men.

That and people’s responses. People saying, “Thank you so much for providing this service. I think it’s incredible.” Women didn’t have an option before, in the United States. And so it’s been kind of neat, kind of special.

To learn more, visit Cowboys 4 Angels and check out Gigolos on Amazon or Showtime.