Spend any amount of time talking or reading online about romantic relationships, and you’re likely to hear someone, if not multiple someones, bring up The Love Languages.

“Burritos are totally my love language!”

Yes, they’re sometimes used jokingly. (Not that I don’t take burritos seriously.) At least as often, though, you’ll hear the term used by people working to attract a partner, make the most of their romantic relationships, or to guide others toward either.

When I finally hunkered down to read about the love languages and take the quiz myself, I realized that they may be more hype than helpful for some people—myself included. Because mine is a seemingly unpopular opinion I wasn’t able to find much similar content about, I decided to record a Girl Boner Quickie episode about it.

Important note: I have no desire to talk anyone out of something that works well in their life and relationships. Please keep doing what’s most nourishing for you! If you’ve ever felt skeptical of the love languages or curious about another perspective, read or listen on.

Stream the episode on iTunes, Spotify, iHeart Radio or right here. ⇓ Or read on for the transcripts, which have been slightly tweaked for clarity.

How about another Girl Boner Quickie? August here, and today I want to share a few thoughts that might ruffle some feathers, because… I’m not a fan of The Love Languages. Yes, I’m talking about one of the bestselling relationship books of all time.

If the love languages book or concept have had a positive impact on your relationships, great! I’m happy for you. Please keep at it.

If they don’t quite speak to and you’re not sure why or you’d like some solidarity, this episode might help. You can keep it in mind next time someone drops the love language terminology and you feel slightly ugh. The same applies if you like the love languages, but want to hear another view.

First, what are the Love Languages?

If you’re not familiar, they were created by Gary Chapman, an evangelical Southern Baptist pastor, whose book of the same name first released in 1995. Chapman believes that each of us has a primary “love language,” one of five options:

You take a quiz that has questions like, “When you come home after a long day, would you rather receive a hug or a compliment from your partner?’

Here’s what I like about the concept: It’s super important to consider a partner’s preferences, needs and values and the ways they feel most cared for. The rest, I’m not so hip on. Here are a few reasons.

Chapman’s expertise stems from his work in evangelical Christianity, which tends to embrace things like heteronormativity and traditional gender roles. The analysis for the book came from his work counseling couples in his church community. I have nothing against his parishioners, of course, and anecdotal evidence can be rad. But that’s still a very limited scope: one pool of likeminded people. Yet, the takeaways are presented as mainstream. Beyond the Christian community, few people realize where these ideas came from.

In a New York Times article from 2011, Chapman shared that he wanted to speak in an approachable, non-academic-feeling way in the book, which I appreciate. But as a writer who strives for the same, I know there are ways to do so without bypassing more in-depth or useful research.

In a Psychology Today article, associate professor Dr. Tim Cole wrote, “Despite the prevailing embrace of Chapman’s ideas, little actual research has been done on the topic. And intuitively sensible ideas don’t always hold up to empirical scrutiny.”

Cole highlighted a study that conflicts with Chapman’s argument that relationships work best when two people have the same love language. The research also showed that while the vast majority of participants intuitively understood their partner’s love languages, the knowledge didn’t lead to better outcomes.

The love languages remind me fad diets. Remember the Blood Type Diet? Based on your blood type, you’re assigned a diet plan that focuses on certain foods and limits others.

Similar to the love languages, fad diets lack nuance—like the time my former roommate started eating primarily chicken and broccoli because her supposed diet “type” said these were her best options. (Science doesn’t back that diet up either, by the way.)

As fun as it can be to take quizzes and think about these things, I don’t believe we have one primary way of feeling loved. Or even two, or three. I’ve tried to take the quiz several times and could barely answer a single question without wanting to answer, “It depends.”

I imagine the concept could work well for you if you have a clear need that isn’t being met, but the ways we show and receive love depend on so much and vary endlessly.

And don’t most intimate relationships need to be nurtured with time, kind gestures, thoughtful gifts, physical touch and encouraging words? To me that’s another parallel with the diet industry. Balance, moderation and tuning to your body — or in this case, a partner — aren’t nearly as marketable as you’re either A, B or C.

They don’t account for trauma, privilege or gender stereotypes.

In a thoughtful blog post on The Span of My Hips, the writer shared that one thing she feels is sorely missing from Chapman’s understanding and definitions of love languages is an understanding of power, trauma and emotional labor. I completely agree. I also think our perceived “language” can be hugely impacted by social norms.

What if you or a partner has learned from societal or religious messaging that women are supposed to serve (i.e. acts of service) and men aren’t supposed to be outwardly emotional or vulnerable (which could fall into words of affirmation)? I don’t think that makes either of these your love language, so much as an area of self-work you could stand to consider.

I dated someone once who grew up with a mom who did all of his housework and then expected the same thing from potential partners. I don’t think that’s a love language. I think it’s a cultural believe worth changing.

Even if all of that weren’t the case, I’d much rather my partner express love in ways that make sense for both of us — and that if he’s not sure, we talk about it — than because he believes I have a type.

If you’re rolling your eyes, that’s okay! I’m sure you’re not alone. I ran a Twitter poll recently and 55 percent of participants said they’re a big fan of the love languages, 31 percent reported feeling neutral and only 14 percent found them annoying or possibly harmful. So I’m a minority, even in my own circles.

One commenter added this note: “Needs change as lives change; so does which language we give and prefer to receive. I don’t think it’s a one-and-done.” I love that idea, whether you use a particular love language to describe your wants and needs or not.

A recent study for Hinge involving the general population showed that quality time is, by far, the most popular love languages for all genders. If the Love Languages book and concept help people realize that prioritizing shared time is important for nurturing a relationship, that’s groovy. 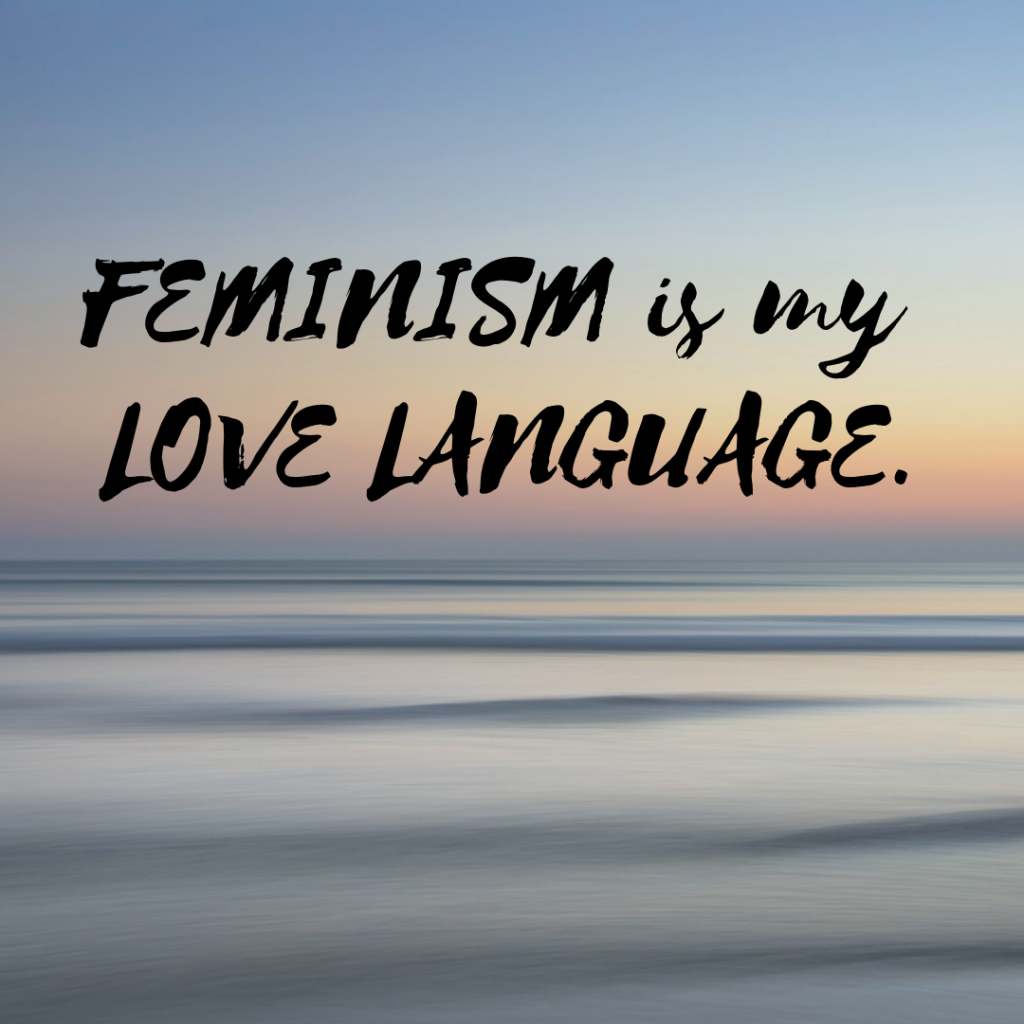 In the NYT article I mentioned earlier, Chapman gave this advice:

“The key to a successful marriage is a growing marriage. We are two different people. We are always going to have conflicts. A growing marriage is learning how to respect the other person, see them as a person also made in God’s image. If both of you ask God to help you express your love every day, and give you the wisdom to process your differences, to me you will continue to grow through the years.”

I suppose that’s where he and I differ. He guides by his evangelical faith, and I’m a research and social activism junkie who’s more spiritual than religious. We live and work in different communities, but we both do prize love and want the best for people.

If I had to choose a love language for myself, it would probably be feminism. Because to me, little is healthier for relationships of all kinds than equality, compassion and respect.

If The Love Languages don’t quite jive with you (or even if they do), here are a few other books I recommend:

The Ethical Slut: A Practical Guide to Polyamory, Open Relationships, and Other Freedoms in Sex and Love by Janet W. Hardy and Dossie Easton (I’m monogamous, and still found this book helpful.)

And I would be remiss if I didn’t mention my own book, Girl Boner: The Good Girl’s Guide to Sexual Empowerment, which has a chapter on love and relationships, plus lots of tips and true stories about stronger communication, healing emotional wounds and giving and receiving more pleasure.