Every 98 seconds, someone in the U.S. is sexually assaulted, according to RAINN. By the time you’ve read this post, that’s easily five people. Every 11 minutes, the victim is a child.

Numbers like these can make us feel hopeless. How can we make an impact when the problem is so massive?

The trio of creatives behind Show Your Courage are proof that we all definitely can. I had the pleasure of chatting with the team on Girl Boner Radio recently and loved what they shared about the inception of their company, their mission, what they want all survivors and allies of supporters to know and more.

Stream the full episode on iTunes, iHeartRadio, Spotify or here! Or read on for a sneak peek.

Show Your Courage came about after the Kavanaugh hearings. Inspired by Dr. Christine Blasey Ford’s bravery, interior designer Becky Heintz knew she needed to do something.

“I was kind of really distraught,” she said. “My heart was just aching and I couldn’t ignore the feeling. I couldn’t just say, ‘Oh this is happening to someone else. This is another issue.’ I couldn’t be hands-off.”

As Becky went to bed that night, she recalled a little silk scarf she’d purchased. While she considers herself no fashionista, she said she loved it and wondered if she could create a scarf people could wear to show support. After a period of self-doubt, she shared her idea with her husband, fellow interior designer, Paul Heintz.

“When she told me, I was like, ‘Let’s do it!’ Paul recalled, later confirming the way Becky’s thoughtful, research-focused style and his tendency to leap into action compliment each other. “I think maybe an hour later I said, ‘We’re reaching out to Shleigh… She’ll know what we need to do.”

The opportunity couldn’t have been timelier for textile designer, Shleigh Pasini. She’d been similarly affected by the hearings and, like many people, stunned by the fallout thereafter.

“It just seems like a really important time in the history of our culture that this is happening,” she said. “So when Paul and Becky approached me, it was more like, ‘How can this be done?’ I was more than ready to get started.”

A mere two weeks later, the team had a prototype. And the end result, currently available in red and black, is as gorgeous as their advocacy. Proceeds from the scarves benefit several nonprofit organizations, including Dressmember, Impact Personal Safety and Girls, Inc. 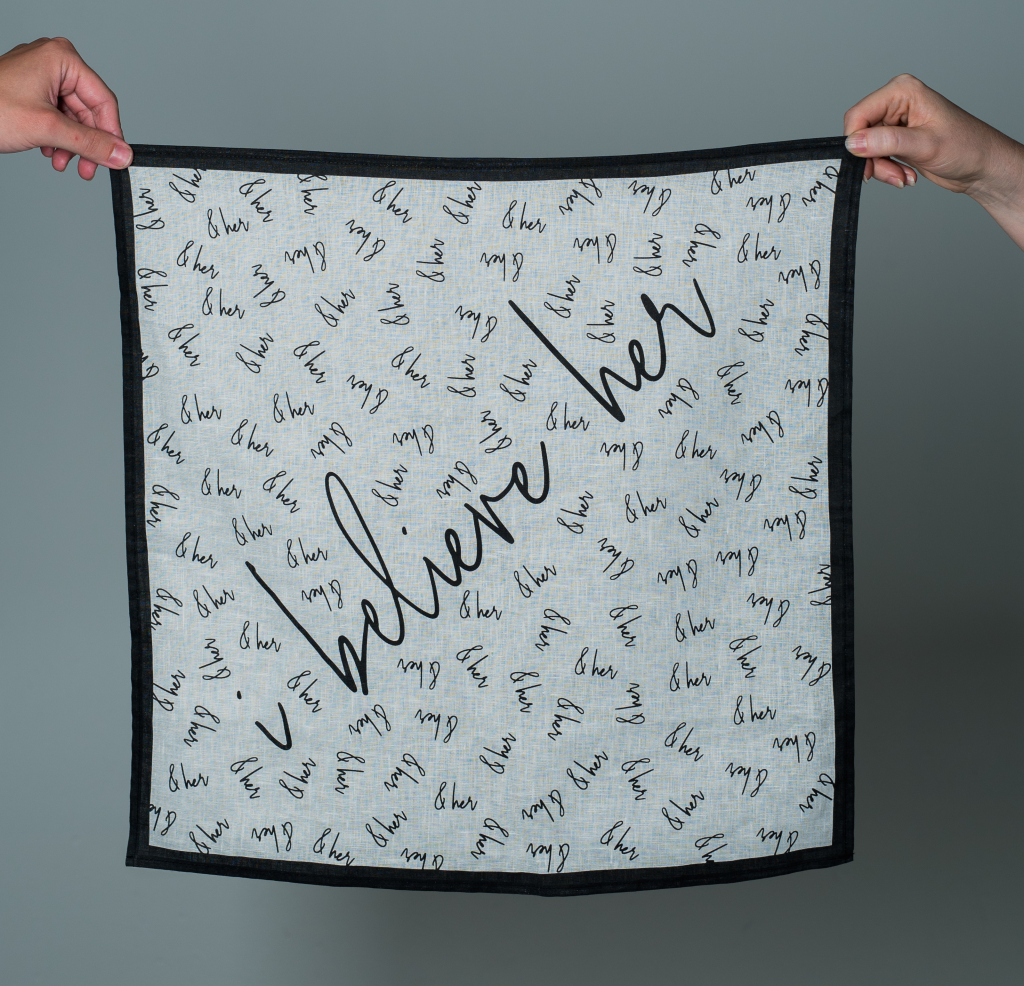 I love that they chose to create an item that wraps around you, almost like an embrace. When I asked Becky if that was intentional, she said in many ways, yes.

We’re going to take off these chains and we’re going to replace it with something that’s soft and comforting. You have this community and we’re going to build this visible and public symbol that tells people who have shared heir stories, but also the people who are still silently struggling, I wanted them to look up when they’re in the train or in their commute and say, ‘Oh my gosh, I’m not alone. I am supported and, most importantly, ‘I am believed.’”

For much more about Show Your Courage and surviving sexual assault, including Dr. Megan Fleming’s thoughts for a listener who was sexually assaulted and feels ready to pursue dating and sex again, stream the episode on your favorite podcast app or here: