I was about five when I was kicked out of Sunday school. The whole predestiny thing we were learning about, God knowing all of our moves before we made them, confused me. So I raised my hand and asked a question of the teacher, who happened to be my best friend’s grandmother:

“So we’re like dolls and God is just playing with us?”

I wasn’t be sarcastic. I really wanted to understand this concept that felt so perplexing. Apparently that’s not the type of question one should ask in a prim, Baptist setting. But really, didn’t God already know I was going to ask that question? I couldn’t understand how that was my fault, though I secretly hoped it was. Because even then, I preferred the free will alternative. While I never got an answer, I did get a stern talking to in the hallway that would keep me from speaking up as much moving forward. It wasn’t until another pastor told me that we could love gay people but not their “sins,” if they were to act on their desires, that I stopped attending entirely.

If only I’d had access to Nadia Bolz-Weber’s work then.

I recently had the pleasure of chatting with minister and theologian along with actress and producer Amy Brenneman on Girl Boner Radio, in celebration of Nadia’s latest book, Shameless: A Sexual Reformation.

Nadia first made the New York Times bestsellers list with her memoir Patrix, followed by Accidental Saints in 2015. Since our chat, Shameless made the list, too. (I can’t tell you how happy that makes me, given how deeply I value her work.) The founder of a Lutheran congregation that embraces queerness and comprehensive sex ed, Nadia now speaks around the world, and not in a way you might expect of a preacher. The other day she appeared on-stage with Gloria Steinem at the MAKERS Conference, holding a vagina sculpture made out of melted purity rings.

Yes, she’s pretty incredible. As is Amy Brenneman, who you may recognize from her performance as Detective Janice Licalsi in ABC’s NYPD Blue, for which she was nominated for two Emmys, and her portrayal of psychiatrist Violet Turner in the Grey’s Anatomy spinoff Private Practice.

While Nadia grew up in a fundamentalist Christian environment then moved away from Christianity for years before returning and becoming a pastor, Amy grew up in a church she described as “free to be you and me/Godspell” and studied comparative religion at Harvard. 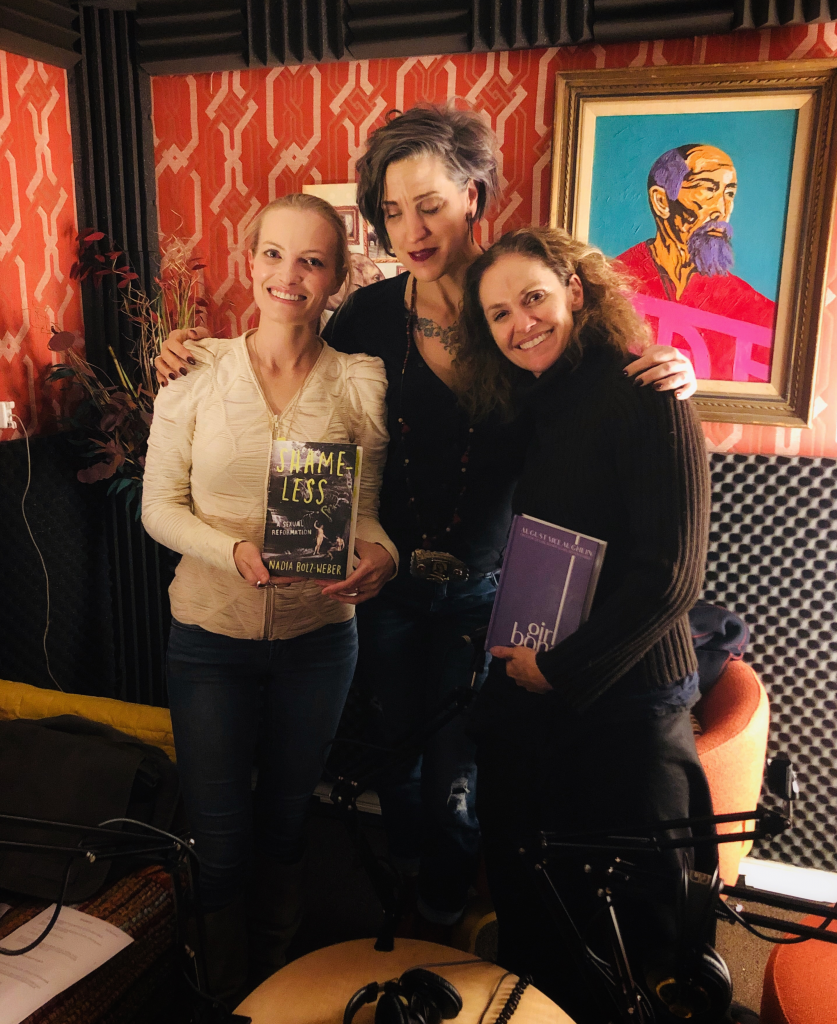 Stream the Girl Boner Radio episode on iHeartRadio, iTunes, Spotify or right here! ⇓ It also features a special message and invitation from Dr. Megan Fleming. Read on for some of my personal favorite takeaways from Nadia Bolz-Weber’s latest book, with a few highlights from our podcast interview.

5 Things I Learned from Shameless: A Sexual Reformation

Song of Songs is likely the only book of the Bible written by a woman. And not everyone considers it sex-related.

“When another kid my age at church told me there as a book in the Bible about sex, it felt as though they admitted that there was a book in the Bible about cocaine,” Nadia wrote in Shameless. She now realizes that the book is about female desire. “Here we have nature, feasting, sensuality, sexuality, and desire…in the Bible,” she wrote. But because male clergy, scholars and theologians called the shots for so long, it was perceived as allegory, symbolizing Jesus’ love for the church, and renamed Song of Solomon.

According to Genesis, life begins with breath.

In the chapter of Shameless I found bravest, Nadia expressed her love for babies and the choice she made not to have one years before becoming a mother. Amid a faculty forum at a Christian retreat she was attending, an older man spoke of hundreds of thousands of Americans being “murdered in the womb.” Nadia responded, “Sir, the fact is, many of us hold a view that Christians and Jews have for a very, very long time—that based on the creation story in Genesis, life begins with breath.”

She added that she’d had an abortion herself in her early 20s, a decision she felt destroyed by for a while yet has never regretted. Then she addressed others in the room: “If you were hurt by something said here in this room today, then I am so sorry. And if you have also had an abortion and would like to talk about it, I would love to hear your story. Staying up until midnight, she chatted with women over cups of tea about their experiences with sex, their bodies and pregnancy. To me, this chapter encapsulates the importance of Nadia’s work and the breadth of her heart.

God’s image is a lot more intersex than cisgender male.

A common perception of Jesus involves a white, cisgender man—sort of a church-going Ken doll with wispier hair—created in the image of God, who’s probably also a straight, cisgender guy, right? And since the creation story says human-folk were created in God’s image, too, that might make straight, cis-guys seem ideal and women, a sort of spinoff. In addition to the sexism there, what about non-binary and trans people?

Undoing dualistic thinking can better lives and the world.

When I brought that last point up in our podcast chat, Nadia added that intersex is naturally occurring and common, but it “messes with our dualistic thinking.” Challenging such thinking allowed her to heal, she said, after swinging from fundamentalism to radical leftist politics to finding her way to a place that’s more nuanced and nourishing.

This reminded me of the stories Linda Kay Klein shared in our interview and her wonderful book, Pure: Inside the Evangelical Movement That Shamed a Generation of Young Women and How I Broke Free. Imagine if everyone found such healing.

Sexual shame is insidious and surmountable.

In Shameless, Nadia explores sexual flourishing, a term I’m completely gaga for. Sexual shame, whether it derives from religious teachings, cultural messaging or elsewhere, fuels a broad range of problems, from depression and anxiety to relationship problems and self-harm. Its roots can go very deep and the work can feel daunting. But that work can be among the most important we ever do and the rewards, dang near magical.

To learn much more, check out Shameless: A Sexual Reformation and stream the latest Girl Boner Radio episode up above or on your favorite podcast app.