Home • Girl Boner • How Counseling Can Totally Transform Your Relationship

Considering couple’s therapy? You’re far from alone. According to a recent survey of engaged, married and divorced people by MidAmerica Nazarene University, some 51% of millennials have undergone couples counseling and 23% of all respondents started before getting married.

I recently chatted with Dr. Megan Fleming, Girl Boner’s resident sex and relationship therapist who has nearly two decades of experience working with couples and individuals, about this trend for an extra special Girl Boner Quickie episode.

We explored seeking therapy preventatively versus amid crisis, five common issues that come up in couples counseling, powerful ways self-work can benefit a relationship and more. We also discussed her free upcoming webinar  and her 5-week course, THRIVE, both of which I’m SO excited about. 🎉

Stream the 20-minute episode on Apple Podcasts, iHeartRadio, Spotify or here. ⇓ Read on for partial transcripts, which have been slightly tweaked for clarity.

August: Why do you think so many millennials, in particular, are interested in couples counseling?

Megan: It might have to do with a lot of them growing up as children of divorced parents and not necessarily seeing a lot of role models in relationship. I think in general in our culture, we don’t necessarily see that. And I think they’re really motivated to truly live their best life and they’re doing a lot of growth and personal work, not only for individual growth but to really grow as couples. How do we become that extraordinary couple? How do we thrive?

August: I’ve mentioned this to you before, but I have to thank you again because my partner and I started therapy because of a segment on Girl Boner, where you said it’s a wonderful thing to do preventatively. My partner mentioned appreciating the segment and I said, “We could do that.”

So we started therapy and we were like, “What are we going to talk about?” As it turns out, there’s a whole lot you can talk about when you’re not in crisis… It feels like another like level of our relationship, like a second marriage or something. Could you speak to that kind of preventative power? Because it can be hard to stimulate yourself when you’re not in crisis to be like, “We should get support.”

Megan: Right, it’s often the heart attack—the crisis, the affair, addiction—that leads people in. In your case, what’s fabulous is it’s way more productive, because we all did or didn’t get certain things in childhood that we recall in our subconscious.

We’re often recreating and reenacting patterns. Some of them are good habits that really work for us. Other ones, not so much. Being in couples therapy is a huge opportunity for someone to sort of be a mirror. And what I love about couples therapy, versus individual, is when you’re working with an individual, they can only come from their own pain point and this is their part, but they’re not necessarily seeing how they’re co-creating it: What’s their contribution? Everybody has those sticky or core issues.

When you seem like you have the same argument repeatedly and don’t necessarily come to a resolution, that’s where couples therapy can really come in, to help you understand the pattern as well as get real clarity. Like, where do you want to go?

August: If someone does seek counseling spurred by a conflict, whether it’s a major crisis or a specific issue they want to work through, I think it can be easy to think, “Cool. I’ll go in and I’ll get an answer and then, poof! Progress.” What can you tell us about expectations, as far as the benefits unfolding and timeframe?

Megan: Sometimes, in one or two sessions, it’s information and a light bulb moment. Other times, importantly, it’s a process. It’s the inside job… The process of therapy and looking at oneself can be uncomfortable, but that’s always where the growth is.

I think it’s important that people listening recognize you have to have the commitment. It is an investment of your time and your money into your relationship… Ideally, both people are actively engaged, but one person can sort of change the tides. So that’s why I always encourage that if your partner isn’t open to it, go for yourself, because you, individually, have a lot of ability to change the dynamics. 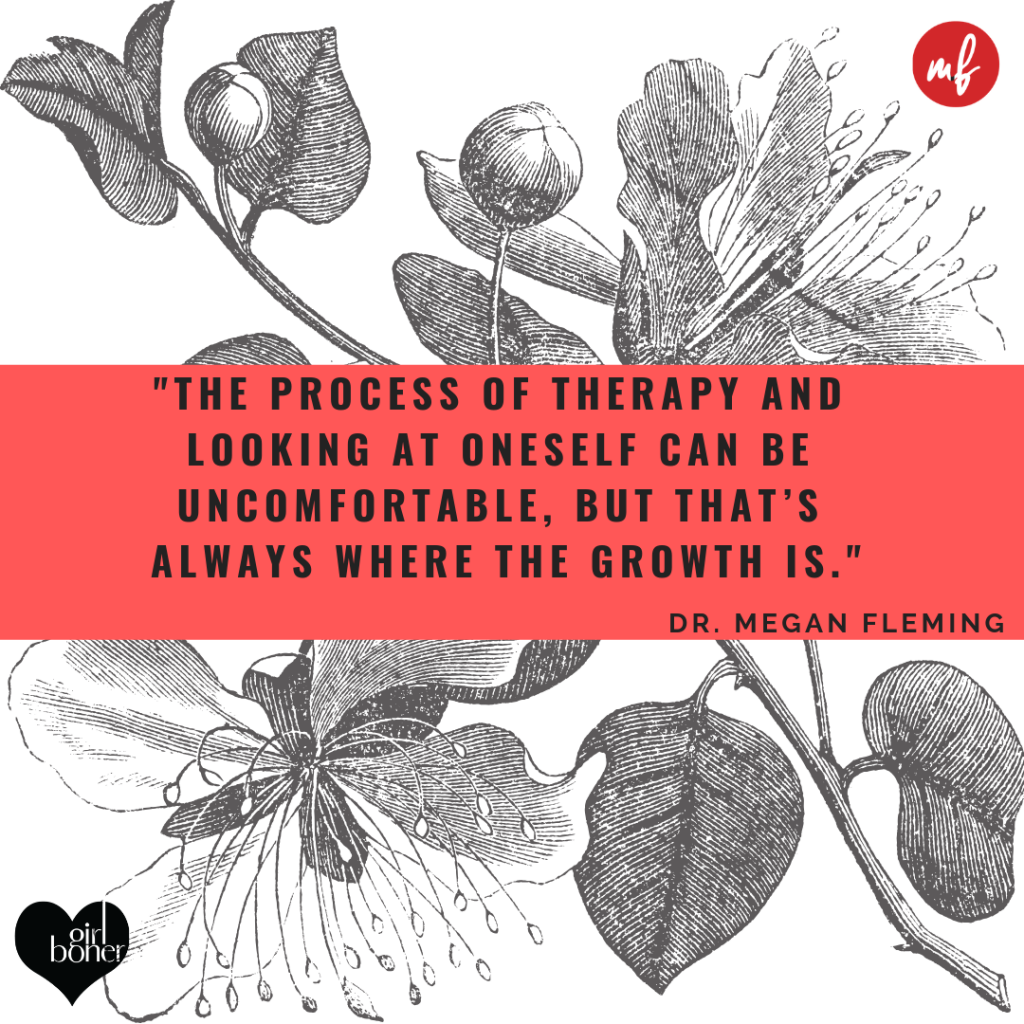 August: The Cosmo article you were interviewed for explored common problems that come up in couples therapy. I’d love to quickly hear your thoughts on each. One was one partner wanting more sex than the other.

Megan: In the romantic phase, typically one person has higher drive. Honestly, over the course of the relationship, stress, medical conditions, medications or other factors contribute to higher or lower desire. Certainly that can change, but it really creates a lot of tension in many marriages and long term relationships. Sex therapy can help individuals realize that they’re not alone and that there are actually practical things they can do to sort of bridge that gap and understand what sex means to someone and how it helps them feel.

You should not suffer in silence and you shouldn’t be taking one for the team if it’s not working for you, because that’s definitely setting yourself up in your body up and your relationship up for disaster.

August:  I’m really glad this next one made the list, because it wouldn’t have been something that came to mind in terms of what drives people to go into couples therapy, but it makes so much sense: serious tech overload.

Megan: If we think about our attention span, it’s shorter these days, because we constantly have access to information and entertainment and people typically have a phone… We sort of joke that now you can have an affair while your partner is right next to you… Even if you just take two or three times a week to go tech-free or no tech in the bedroom, I see a huge difference.

It changes the dynamics of how people slow down and actually have a conversation with one another because energetically, when we’re on our phone or device, we’re taking energy away from our relationship. Sometimes, we’re doing it consciously and other times, it’s not so conscious. It’s just sort of a bad habit.

August: I think that’s such an important thing, to practice mindfulness in our lives and notice the role tech plays. Number three is confusion over roles.

Megan: Oftentimes now, both men and women are working. So when you have kids or a lot of opportunities, you see a lot of different arrangements, where maybe she’s the breadwinner and he’s staying at home. When it comes to how you manage finances and running of the home, you really have to have clear conversations. People often make assumptions based on their own experience growing up and what their parents had and they’re not necessarily saying what they want and what they need in the relationship with their partner.

August: Speaking of role models and what you shared earlier about divorce issues, I imagine that could play a role on number four: big fear of marriage or commitment.

Megan: Absolutely. When you have not had positive relationship role models or you saw a very painful divorce, it can go either way. You could feel really angry and hostile…or you can cut the tension with a knife. Either way, nobody wants to experience or duplicate that, so I think fear is a factor. Fear is false evidence appearing real, but the reality is, for many people, reacting or responding to fear gets in the way of wanting to take that next step. What if you realize that you have issues around commitment? Again, that’s a great reason to go individual and couples therapy.

August: And the last reason listed for seeking couples therapy is missing out because of love.

Megan: In a healthy, committed relationship, you’re not only growing individually, you’re helping each other to grow. I think people often think of marriage as this weight and losing freedom. It’s important for anybody to recognize it really depends on the nature and the quality of the relationship. There’s no reason you should lose freedom or the ability to express yourself or thrive in life because you’re committed or married.

August: Lastly, what’s one of your biggest goals for Girl Boner listeners?

Megan: I think it’s for them to recognize that a relationship does take two, but to impact your relationship and create changes you desire, it only takes you. I know it sounds cliche, but the point is, as I said earlier, one person can turn the tide. So I want to empower anybody who is listening to realize we have to take our power back in our lives, in our relationships and in the choices and actions that we make.

To sign up for Dr. Megan Fleming’s free webinar—a live-stream experience in which you’ll learn about her upcoming course plus practical tips for cultivating your ideal life—visit greatlifegreatsex.com/thrive.