I adore my clitoris, now that I know what and where it is.

Professor Olga Rockenstein stood before the Psychology of Female Sexuality, staring at us with bulldog-intense eyes. “Women know too little about their bodies,” she said. “Do you know how many don’t even know where their clitoris is?”

As her gaze caught mine, my expression read: “You’re kidding me!” What I really thought: My what?

The word sounded familiar, but I was 20, and too much time had passed since high school health class. When she called it the “pleasure button,” I assumed it was the area inside the vagina that lights up and explodes, triggering uncontrollable delight and making the entire world disappear, during orgasm. (Sigh…) 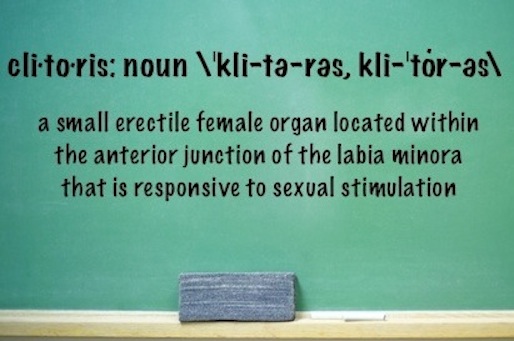 I wasn’t even close. When I learned its actual location, between the inner folds of the vulva, at the top of the labia (diagram here), I wondered if mine was broken. When I or my boyfriend touched mine, I felt…ticklish. Really ticklish, as in it nearly hurt.

If you relate to this, I suggest not Googling “sensitive clitoris,” unless you want nightmares and psychosomatic symptoms and of a clitoris-clobbering disease. Chances are, there’s nothing wrong with you. (If you suspect an illness, though, definitely consult your doctor.) Regardless, all clitorises are sensitive, and as lovely as the flowers they’re named after:

♥ A highly sensitive clitoris is usually just that—an organ so sensitive that mild touch can cause sensation overload. It’s more common among people with increased overall sensitivity, from what I’ve gathered, and in women prone to G-spot orgasms.

♥ You know how penises get incredibly sensitive post-ejaculation? Well, the clitoris is comparable to the head of the penis, only it’s smaller and has many more nerve endings—about 7,000. (So guys, imagine that sensation, multiplied by about 200.)

♥ If your clitoris has typical sensitivity, touching, kissing, licking and sucking probably feel DAMN good, and make way for climax. Clitoral orgasm is the most common and easiest to achieve, according to sexuality expert, Dr. Laura Berman.

♥ If yours is highly sensitive, you probably prefer gentler touching or pressure, on or around your clitoris. Vaginal (aka, G-spot) orgasms are likely to be your numero uno. In blended orgasms, we come in both places—YEE HA!

**It’s important to note that one type of orgasm is not superior or ideal. Our sexuality is unique, and we should all feel great about our personal style and preferences.

There’s also no “right” way to engage or enjoy our joy buttons. The key is knowing how our own works, and communicating with our partners, as needed.

Earlier this month, Clitoraid, a Las Vegas-based group namely devoted to helping victims of female genital mutilation, hosted the first ever International Clitoris Awareness Week. When a few of my sassy, Girl Boner-loving friends, and I learned of it, we decided to throw a party. And guess what. You’re all invited! Actually, you’re already here. SURPRISE!

I know—a rather clinical party piece, but I happen to LOVE chatting about clitoral quirks at parties. Consider this segment the #GirlBoner geek in the room, and check out the following blogs later today, some of which will be slightly more steamy:

Prizes will be awarded for the most retweets and/or favorites, with extra points given for creativity. (Pssst! Guys can enter, too! Talk about a romantic gesture—tweeting about your sweetheart’s clit.;))

Will you be partying with us today? What have you learned about your clitoris? Is yours hypersensitive? I just LOVE your respectful thoughts.