Home • Writing • Too Many “Cooks” In Our Fiction: The Biggest Lesson I Learned From Book One

Ever try to cook with a group? As you chit chat away, it’s easy to get sidetracked. And dang it, salt looks a lot like sugar… 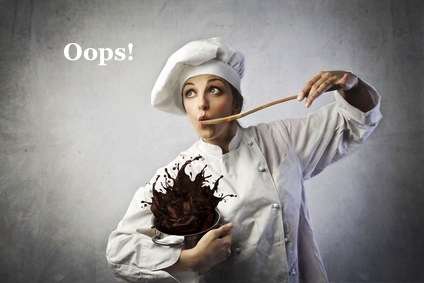 As some of you know, I’m working on my second novel while my agent markets my first. It’s an interesting position to be in. I’m no longer in agent-seek mode, don’t yet have a publishing editor to bounce ideas around with and have no deadlines looming. (I’m doing my best to savor that fact. From what I’ve heard, this can change quickly.) Gone is the blissful ignorance of writing book-one, when I had little clue as to what I was writing, much less how much improvement I lacked. But of the many lessons I learned from writing book one, this trumps all:

Trusting our instincts is as important as the writing itself.

As I finished my first-ever draft, I sought feedback from others—not just anyone, but reputable industry folk. And wouldn’t you know, I gained a slew of diverse opinions. I absorbed the information and did my best to stay true to my story while incorporating insight from trusted pros. One suggested I add a work crisis, another a bit of humor. Several suggested I switch to past tense. They’re experienced, I figured. Best I listen.

What I didn’t recognize then was that even brand-spanking new rookie authors know more about their stories than seasoned professionals. How can we write authentically if we’re peering through another’s lenses?

“Too many cooks in the kitchen” isn’t the pathway to success, but to a chaotic, if flavorful, mess.

Fast forward to last year. After signing with my agent, we discussed my draft in depth. He asked many questions, pointed out aspects he felt were strong or needed work, and which characters and plot points were necessary. The ending, he felt, was too abrupt. In order to flesh it out more (there’s a pun there you may get someday… ;)) I’d have to make some significant cuts.

Once back at my drawing board, I was struck by the fact that nearly every change I made brought my novel closer to my original story. Scenes and characters I’d added based on others’ feedback were cut. My original ending had been longer. Even my original tense returned. This isn’t to say that my first draft was awesome and publisher ready; it was far from it. But the story born of my initial thoughts materialized, making for a stronger, more confident work. Finally I felt I was finding my voice.

Going forward, I’m committed to listening to and honoring my instincts. Only once I have a full draft I’m confident about will I consider seeking input. Even then, I won’t trust others more than myself. It’s not always an easy task, particularly when we’re newish to the game. But take it from one who learned the tough way: Your instincts are probably wiser than your realize.

There can be great value in beta-readers and feedback from trusted friends and colleagues. But the moment we put decisions in someone else’s court or go against our intuition, we run the risk of telling a weaker story. And it’s not the critic’s fault if we abide by his or her feedback and it doesn’t work out, but ours. The best beta-readers and editors will tell us this. Then it’s up to us to listen. As gifted editor and author Mike Sirota once told me, “You are the goddess (or god) of your book.”

Do you rely on others’ feedback during the writing process? Have you learned to trust your instincts? What did writing your first book teach you?