Blossom Brown grew up in Jackson, Mississippi, a city known for southern hospitality, gospel soul music and sumptuous soul food. It isn’t, however, known as a particularly LGBTQIA-friendly region.

Growing up, sex talks from Brown’s parents made her uncomfortable due not only to surrounding taboos and her strict upbringing, but because of deeply personal questions that had stirred within her for years. Assigned male at birth, Brown said she came into her truth by age 21: that she was very much a woman.

Brown is now an actress, producer, trans health advocate, motivational speaker and openly transgender woman whose platform elevated significantly after appearing on I Am Cait, a documentary series that chronicled the life of Caitlyn Jenner after her gender transition, and on The Ellen Degeneres Show, after nursing schools rejected her for being trans. Equally passionate and proactive, she continually uses that platform for good.

Blossom Brown is legit making the world a better place.

I loved chatting with her on Girl Boner Radio. We explored her personal journey, issues that affect black trans women in particular, the gendering of sex toys and more! We also covered basic definitions of transgender and gender for anyone unfamiliar.

“What trans means is basically how you identify is different from the sex that you were assigned at birth,” Brown said. “[Gender] is not just an outside feeling. It’s how you feel on the inside as well… When you’re trans, some people do take the steps to transition. Others don’t. And both are fine… Gender is very fluid, just like sexual orientation is. I think sometimes we forget about that. We’re still so stuck on the whole binary—you’re a man or you’re a woman.” 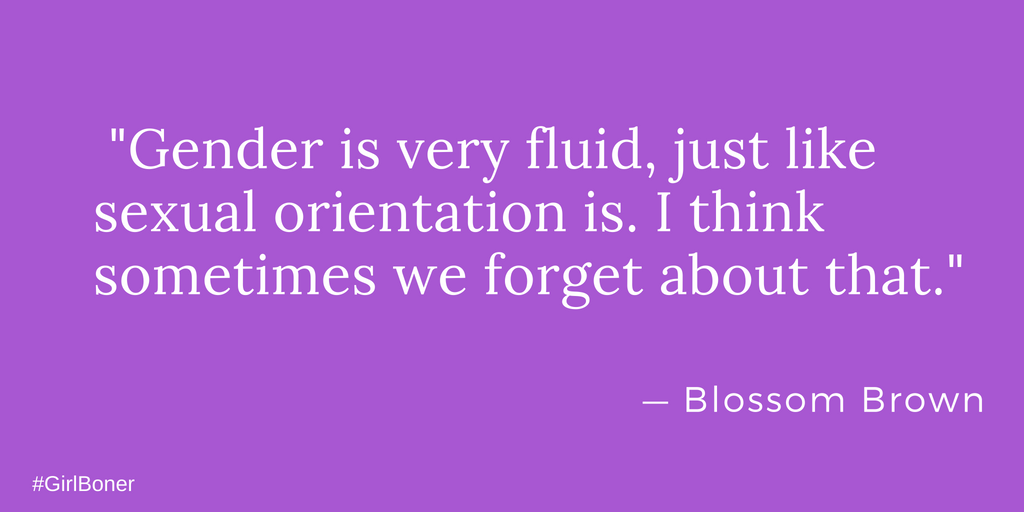 Now that she’s fully embraced her trans identity and built a career she loves, Brown radiates confidence and ebullience. (We literally boogied during the Girl Boner intro music!) But these traits weren’t easily accessible to her for some time. Through experience, she’s learned the importance of building courage and wisdom, particularly for anyone facing bullying.

“Believe it or not, I was one of those people that had low self-esteem when it came to relationships… Growing up, I was much more of a follower than a leader. I wasn’t the cool kid on the block. So I had to really find ways of dealing with bullying,” she said, adding that doing so is easier said than done. “You have to be willing to find your weakness, conquer it, and find strength in that. It’s okay if it takes time. You do it on your time. You can look at people around you, but never compare your journey to theirs.”

Stream our full chat on Apple Podcasts, iHeartRadio, Spotify or below! The episode also features awesome thoughts for Dr. Megan Fleming, for a listener who wonders why vibrators don’t really do much for her and how common or “normal” that is.