Have you heard the term healthy attachment? Psychologists use it to describe feelings of safety and trust within a relationship, such as between a parent and child. It sets the stage for healthy emotional development and the ability to thrive in many ways, from being better able to regulate difficult emotions and developing confidence, to experiencing stronger physical health, social skills and relationships.

A lack of healthy attachment early on can raise your risk of sex and love addiction, according to experts. While debate continues as to whether or not sex and love addiction symptoms fit the traditional addiction model, the World Health Organization listed “compulsive sexual behavior disorder” to their International Classification of Diseases this year and the countless people who struggle with the compulsions and dependencies will tell you, it’s no joke.

I recently had the pleasure of exploring these topics with Charlene deGuzman, a writer and actor here in Los Angeles whose new film Unlovable is a must-see. Based on her personal experience with sex and love addiction, I found it as charming, poignant and inspiring as she is—which says a lot! Charlene wrote and stars in the film, which also features John Hawkes and Melissa Leo under the direction of Suzi Yoonessi. And it began taking shape after Mark Duplass followed Charlene on Twitter in 2013.

“I DMed him, ‘Thanks for following me, you’re one of my heroes,'” she told me during our Girl Boner Radio chat. A year later, once she’d started recovering, she wrote a pilot based on her experience, sent it over to him, “and he said I want to meet you and I want to make a movie.”

Last week, several years after that conversation, Unlovable released to theaters and on-demand platforms and has been met with enthusiasm, gratitude and acclaim. I loved discussing the film and its themes with Charlene and suspect you’ll love what she had to say.

To learn much more about sex and love addiction and Unlovable, find the episode on iTunes, iHeartRadio, Spotify or most anywhere you listen to podcasts! Read on for a just a few highlights from our chat.

4 Highlights from my Girl Boner Radio Chat with Charlene deGuzman

1 August: When did you start to realize that [sex and love addiction] was a problem for you?

Charlene: It’s interesting because I didn’t start getting help for it until 2014, but in 2011, I had a friend one time—I think we were talking on G-chat—and he was like, Have you ever heard of sex and love addiction? And I was like, no. I googled it and saw questions to answer and lists and I thought, Woah, this is me. I had no idea that this was a thing… I think I tried three 12-step meetings, and thought, What the heck? Why is everyone complaining? We’re fine… We’ve got this under control. So I never went back again.

But in 2014, after unavailable man after unavailable man, [I was with someone who] was the most unavailable by far and it was so painful to be with this person. I thought that if I just went back into the 12-step problem, I’d fix it in maybe 30 days and the relationship would be fine. I did that, and we ended up breaking up. A few months after that, I ended up going back to him and sleeping with him three days in a row. He ghosted me, which was normal for him, but at that point I think even having a few months of recovery and sobriety, it hurt more than it ever had before. And because he hadn’t texted me back, I really thought about killing myself… I was pacing my apartment, trying to figure out how to kill myself…and it was like a joke. I didn’t have any knives that were sharp enough, I didn’t have enough pills. The last thing I said out loud was, Where could I even find a bridge?

Then the phone rang and it was him. And just seeing his name and his picture, I could feel all the pain just dissipate from my body immediately like a drug. And it was that moment that I knew that, Oh. This is how I know that I’m sick. It was actually like a drug.

2 August: What were some of the practices that helped you climb out?

Charlene: It was so interesting because my recovery was involved learning what I like to do. What feels good? What’s my purpose? So to really explore that starting out, I made a list of everything I ever wanted to do but didn’t… I went to puppet school..I wanted to try an aerial class…even the simple things, like eating when I’m hungry and sleeping when I’m tired. I realized that I hadn’t known how to take care of myself, my basic human needs.

Then I did nice things like buying myself flowers and taking baths. I had never done that ever before. I never did things that were nice for myself. It was always about some guy I was trying to impress. I didn’t know who I was. That’s what’s really scary about recovery. Once I got rid of the guys, I had no idea who I was because I was always trying to be whoever the guy I was with wanted. I was always trying to be into what he was into or look this way, because maybe he’d like that. I did not know who I was.

3 August: What do you want people to understand about triggers?

Charlene: I think a big part of my healing was, step one, acknowledging those triggers. There’s actually this pamphlet in the program that says, ‘Triggers as Resources.’ Me and my friends always make a joke about it…but the truth is that there are gifts in the triggers, because whatever it is pushing within you, whatever button that is, it’s something that’s coming up to be healed. So if you’re having this big uncontrollable reaction to something, yes, first acknowledge that. Learn to love that and tend to it. But also, there’s something there that needs to be listened to, acknowledged, felt. A big part of my recovery was learning how to feel feelings.

4 August: What have been some of the biggest rewards through your recovery?

Charlene: Honestly, being able to love myself, as simple as it sounds. Loving myself, choosing myself first, really showing up for myself. That’s easy to do on good days, but on the bad days, that’s when the true test comes in. If I can I love myself when it looks like this today? And I can now… It’s not life or death. I have the tools to take care of myself and get through it, and that is just amazing to me versus where I was five years ago.

Learn more by following Charlene deGuzman on Twitter @charstarlene and searching for the hashtag #unlovablemovie. See the movie in theaters or stream it on iTunes, Amazon Prime or other on-demand platforms. 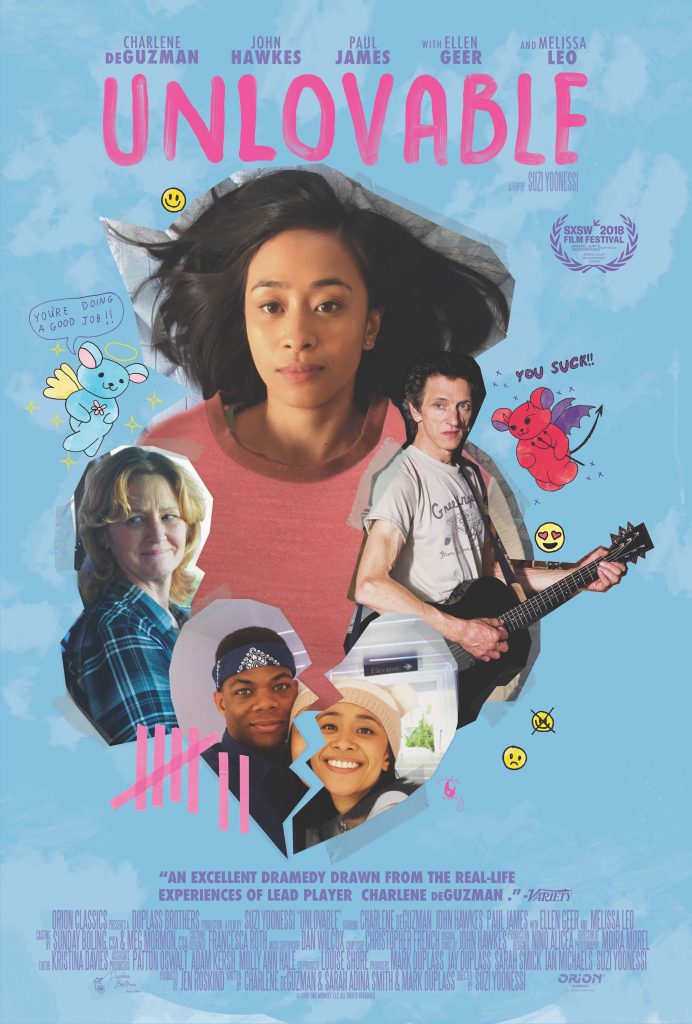